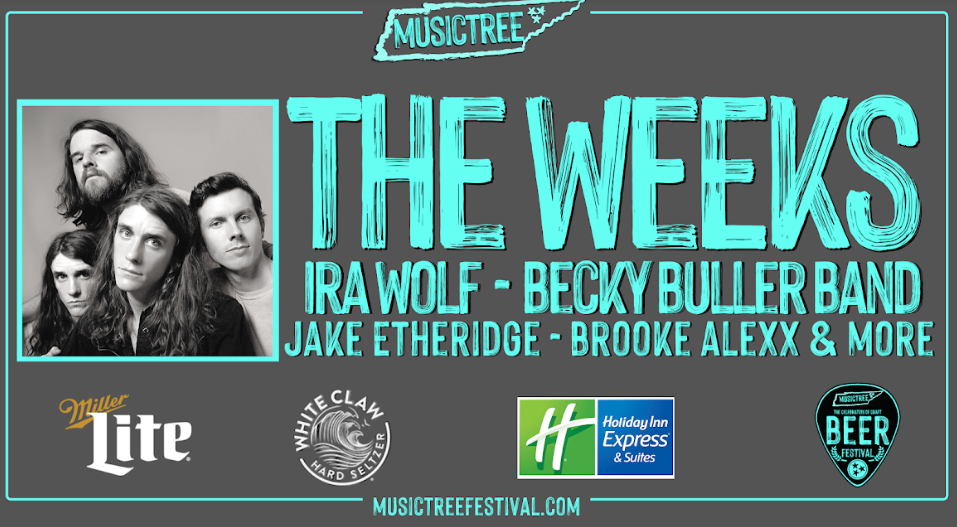 The 2020 Musictree Festival Lineup has been finalized with the addition of popular southern/alternative rock band The Weeks. The complete interactive lineup can be viewed at MusictreeFestival.com.
Since 2012 the Musictree Festival has been known as the premier tailgate or a Bonnaroo “pre-party.” This year’s festival will take place June 4-6, the weekend leading into the Bonnaroo Music & Arts Festival at outdoor venues across the city of Manchester. This year’s venues include Prater’s BBQ, Bites of Europe, and the soon to open Common John Brewing Company.
This year’s festival will also include a collaboration with the Lynchburg Music Fest with the addition of a Lynchburg Music Fest night on June 5th at Prater’s BBQ. The festival will also feature a Craft Beer Festival with 20 regional breweries on June 6th, a VIP Stand Up Comedy performance on June 6, and a traveling Bonnaroo Museum dubbed “Rooseum” throughout the event at each venue.
While the Musictree Festival has been traditionally known for free general admission, this year VIP and VIP+ upgrades are available, along with a Craft Beer Festival Tickets all available for sale while supplies last.
The Weeks, which originally hail from Jackson, Mississippi, are now located in Nashville, Tennessee and regarded as a fan favorite throughout the rock scene. The Weeks new album, Two Moons, released September 13th 2019. Two Moons was recorded in Nashville with Eric Masse (Rayland Baxter, Mikky Ekko, Robert Ellis). Raucous Mississippi rock combo The Weeks got its start in 2006 while all four members were still in high school. Staffed by twin Brothers Cyle (lead vocals) and Cain Barnes (Drums), Samuel Williams (guitar, vocals), and Damien Bone (bass). They released their debut album, Cadillac Comeback, in 2008. Their swaggering, sludgy, and slightly southern indie rock was further expanded with the release of six total albums including five studio albums and one live project. “This Dance” celebrates the 14th anniversary of the band’s formation.
The Weeks will headline the top of the Musictree card that also includes Ira Wolf, Oliver Hazard, and the Becky Buller Band.

Coffee County Baseball and Softball get their Seasons Started