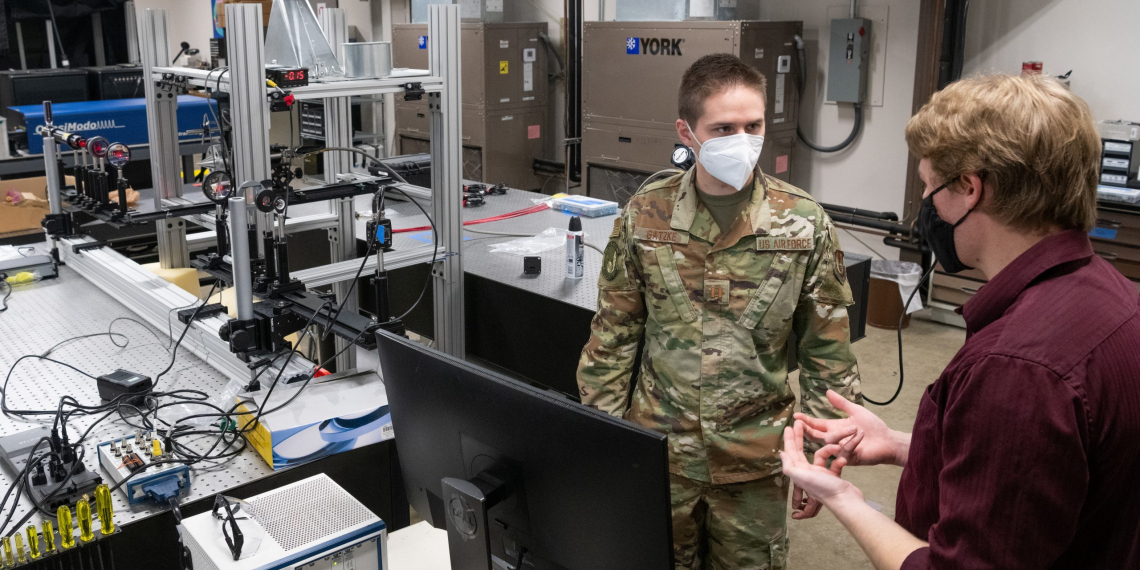 “The U.S. Air Force is developing new turbine engines that introduce special challenges during ground testing, such as test cell heating and acoustics,” said Capt. Brian Gatzke, with the Propulsion Test Branch, Test Division, AEDC. “If low-cost, non-intrusive measurements could be made to better understand the interaction of the exhaust plume with the test cell, then test programs would benefit from more efficient testing and more complete system analysis.”

The Propulsion Test Branch team reached out to Non-Contact Technologies, LLC, a small business in Tullahoma, and UTSI to recommend appropriate measurement methods for use in test cells. In 2020, NCT and UTSI were awarded a Phase I Small Business Technology Transfer, or STTR, through AFWERX to address the need at AEDC.

During Phase I, NCT and UTSI explored measurement techniques that would be ideal for the harsh test cell environment. Because the project produced favorable results, a follow-on Phase II project was awarded in 2021 to continue the work on a larger scale for two different measurement techniques.

One of the non-intrusive techniques being utilized by researchers at UTSI for optical diagnostics in their supersonic and hypersonic wind tunnels is focused laser differential interferometry, or FLDI. FLDI measures density disturbances in compressible flows through differential light patterns generated from focused lasers setup to interfere with one another.

“The lab at UTSI set up a series of lenses, prisms and filters to measure the turbulent and acoustic content of a jet generated in a test rig,” said Theron Price, a doctorate candidate at UTSI. “The high-velocity jet represents the engine exhaust on a smaller scale.

The other measurement technique recommended by NCT and UTSI is retroreflective shadowgraph.

“This technique takes traditional shadowgraph imaging to a larger scale and with a simple setup that can easily be deployed in the field,” said Dr. Phil Kreth, assistant professor at UTSI. “The retroreflective shadowgraph system produces images formed by the shadow of an object or flow disturbances on a reflective surface.”

The light on the image is focused in such a manner through the exhaust plume that the refracted light appears to a camera as light and dark regions, which vary based on the density of the air in the plume.

“By using high-speed cameras with the system, we can image both the flow patterns in the plumes and the surrounding acoustic fields at very high rates,” Kreth said.

The shadowgraph demonstrations were conducted at UTSI and then on a larger scale in AEDC test cells.

“The use of optical flow visualization has been used for many years in wind tunnel testing, Gatze said. “Now we’re looking at how we can use it for jet engine testing and research.”

According to Terry Hayes, the chief technology officer for NCT, the object of Phase I is to develop a technique that can benefit not only Department of Defense test and research organizations but commercial industry as well.

“UTSI led the development of non-intrusive, field-deployable flow measurement techniques and associated data reduction methodology,” Hayes said. “Additionally, our NCT team has the expertise in the dynamic data analysis side and can bring production of field-ready, rugged equipment and non-intrusive measurement experience to the table. Working together, our goal is to create a solution that will give AEDC and major Air Force stakeholders a capability that will fulfill their requirement for research in nozzle testing and also provide a deployable system that can be used in the field or an altitude test cell to meet their customer requirements.”

Capt. Brian Gatzke, a test engineer with the Propulsion Test Branch of Arnold Engineering Development Complex, speaks with Theron Price, a doctoral student at the University of Tennessee Space Institute (UTSI), about the focused laser differential interferometry set up in front of them at UTSI within the confines of Arnold Air Force Base, Tenn., Dec. 15, 2021. (U.S. Air Force photo by Jill Pickett)