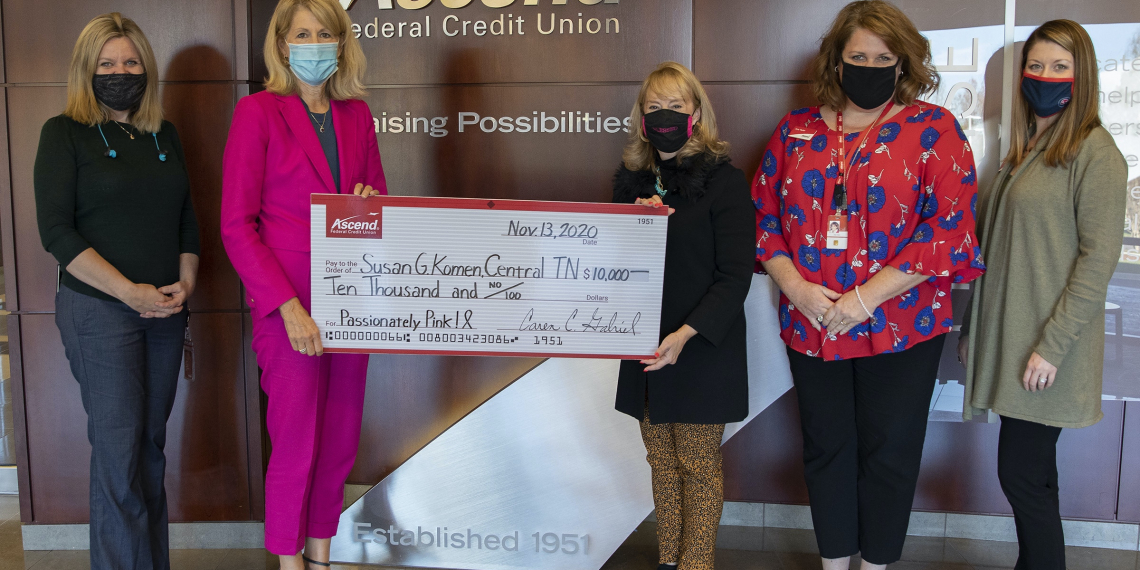 Ascend Federal Credit Union has donated $14,515 to the Central Tennessee chapter of the Susan G. Komen Breast Cancer Foundation. The contribution includes $10,000 from the credit union and $4,515 from Ascend employees. The money will help fund local breast cancer detection and support projects for those with critical needs, with the goal of eliminating barriers to lifesaving services.

“We are so thankful to Ascend for this significant donation to Susan G. Komen,” said Dawn Eaton, CEO of Komen Central Tennessee. “We have a treatment assistance program that provides financial assistance and services to uninsured and underinsured men and women in Tennessee who are undergoing breast cancer treatment. This money will impact the lives of many people who are struggling to meet the financial demands of pain medication, chemotherapy, childcare and other needed services as they undergo treatment.”

“We are extremely proud of our 17-year partnership with Komen,” said Caren Gabriel, Ascend president and CEO. “Everyone deserves access to quality healthcare and support during treatment. Our employees have proven again just how passionate we are about making Middle Tennessee a better place to live for all of us.”

Through an annual dress down program called Passionately Pink for a Cure, Ascend employees donate a minimum of $5 every Friday and Saturday in October to wear blue jeans, breast cancer awareness T-shirts and Susan G. Komen pins to work. Donations brought the 2019 total to $5,546 and the 2018 total to $3,194. As previously mentioned, employees raised $4,515 this year, submitted directly through the Komen online donation portal.

Latest COVID-19 Numbers; Bedford and Coffee Counties on the Rise