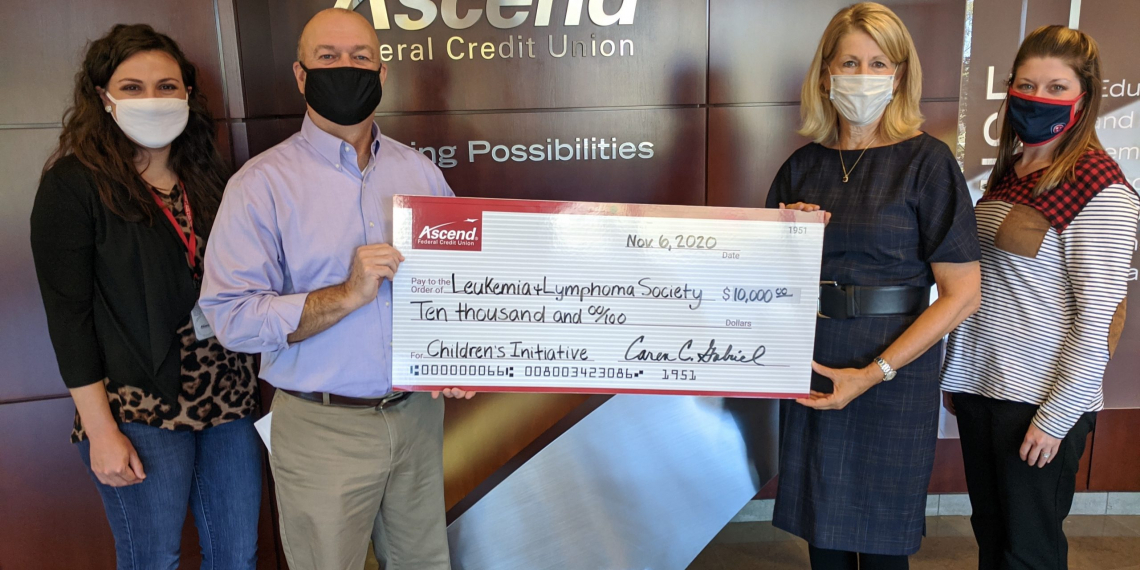 Ascend Federal Credit Union has announced it has donated $10,000 to the Tennessee Chapter of the Leukemia & Lymphoma Society (LLS) toward LLS’s Children’s Initiative, a ground-breaking global program supporting critical childhood care and cancer research. The contribution helps cancer patients have access to quality, affordable and coordinated care, and makes Ascend one of LLS’s top corporate donors in Tennessee.

“Many children survive acute lymphoblastic leukemia, the most common type of pediatric blood cancer. However, the long-term effects of current therapies can create severe complications,” said Jeff Parsley, LLS Tennessee Chapter Executive Director. “That’s why we are increasing our investment in pediatric research so we can create safer, life-saving therapies for people living with blood cancers. We appreciate the continued support from Ascend, one of our top fundraising companies in Tennessee. Donations like this allow us to continue expanding research and care.” “This year has presented unique challenges, which makes it even more important to support our healthcare community,” said Caren Gabriel, Ascend president and CEO. “We are proud to have supported LLS for 14 years and are honored to have a role in the advancement of research, treatments and support for cancer patients and their loved ones.” LLS is the leader in advancing breakthroughs in immunotherapy, genomics and personalized medicine. The organization is pioneering an unprecedented collaborative clinical trial to change the way pediatric blood cancers are treated, involving more than 200 children’s oncology hospitals in the United States and Europe. The goal is to dramatically shift the standard of care, moving from therapies that can leave patients with lifelong health challenges to treatments that precisely target cancer without harm to the rest of the body.

In addition to the LLS Children’s Initiative, this Halloween, employees at Ascend locations throughout Middle Tennessee participated in the LLS annual fundraiser “Costumed for a Cure,” dressing up in their most creative costumes and decorating pumpkins. Anyone who visited an Ascend branch could vote for their favorite costume or pumpkin with a contribution to LLS. Donations also were accepted though a custom fundraising website. Despite the pandemic, the event raised $3,749 from employee and member donations — $1,500 more than 2019, bringing the 14-year total for Costumed for the Cure to $37,103. For more information about LLS, visit www.LLS.org.

Thanksgiving Travel will be Down this year