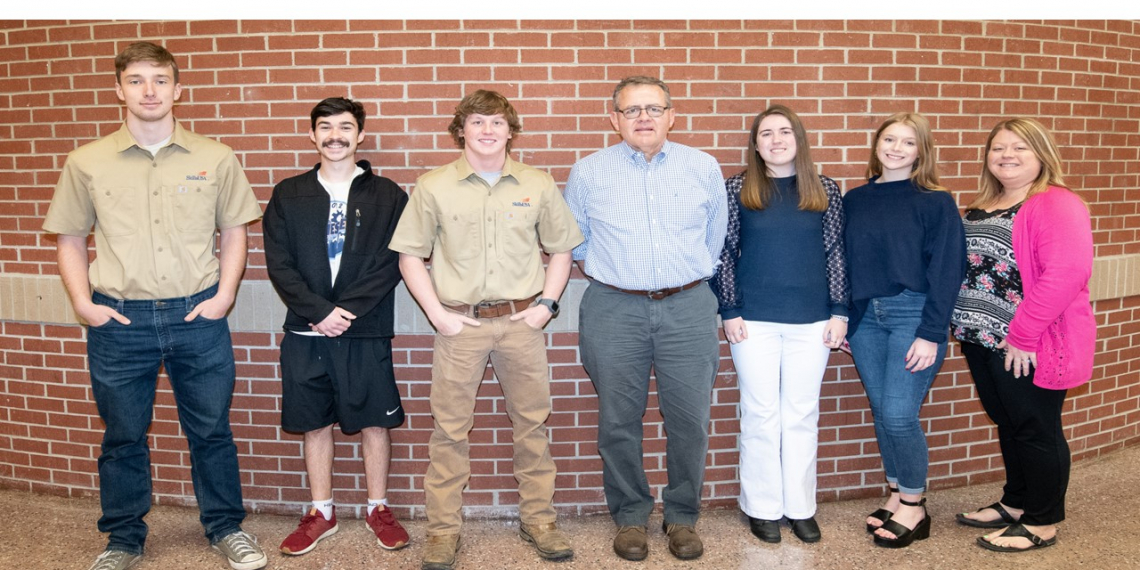 “What a great showing by our Tullahoma High School CTE students at the state competition,” said THS Principal Jason Quick. “Under the tutelage of Mr. Randy Edwards throughout their high school careers, these young people have demonstrated remarkable talent in taking their ideas and turning them into reality on paper by creating actionable prototypes. The community of Tullahoma continues to produce the highest level of young engineering and drafting professionals.”

Nicolais Zimecki, Jackson Hamblin and Jonathan Raulston led THS with a gold-medal effort in the Automated Manufacturing Technology competition. During the three-member event, teams were given a part they had to design. The Computer-Aided Design Operator constructed the part’s geometry, while the Computer-Aided Manufacturing Operator generated the tool paths and the Computer Numerical Control Operator completed the setup and machined the part.

“We were given a part and had to cut it out using a simulator, kind of like in a CNC mill,” Jackson Hamblin said. “We were all pretty nervous going into it. Once we settled our nerves, we performed well and got the outcome that we wanted. It was a really cool competition, and we are really looking forward to nationals.”

“Winning gold at the state level made me feel very confident in our abilities as we head to nationals,” Zimecki added.

With the gold-medal spot secured, the three THS students will now compete at Nationals this summer. Only state winners are invited to participate in this year’s SkillsUSA National Leadership & Skills Conference, which takes place in Atlanta from June 20-24. The Championships will be held on June 23 and 24. More than 6,500 career and technical education students will compete in the 108 different trade, technical and leadership fields.

“It was a really fun experience,” Evans said. “The competition was great, and it was really neat getting to see all of the students from the other schools in one place. It was a lot of fun. You could tell that some people there were stressed, but I was not. I just went in wanting to enjoy the competition.”

Drummond was the runner-up in Architectural Drafting. While she was happy with her performance, she has turned her eyes toward gold for next year’s competition.

“I finished second this year as a junior, but I really want to be first in the state. I’m happy with how I did, but I know that I can do better. Overall, I think the competition was fun. I had no idea what to expect at first.”

According to CAD Teacher Randy Edwards, watching his students succeed at the state competition was truly rewarding. He hopes that the program’s success at state will inspire other students to compete in the future.

“They are great kids and great students, which makes this so awesome,” Edwards said. “This competition allows them to stretch their abilities and go out and learn above their current curriculum. These are the elite students in this program.”

“We are hoping that automated manufacturing takes off and starts to grow. It’s a collaboration between myself and our machine shop teacher, Derek Swiger, who works on the CNC part of the competition. We want to see this program grow because these skills are what local businesses have told us they are looking for in their employees. They want to have our students be ready with the ability to create models, code, and communicate with automated manufacturers.”