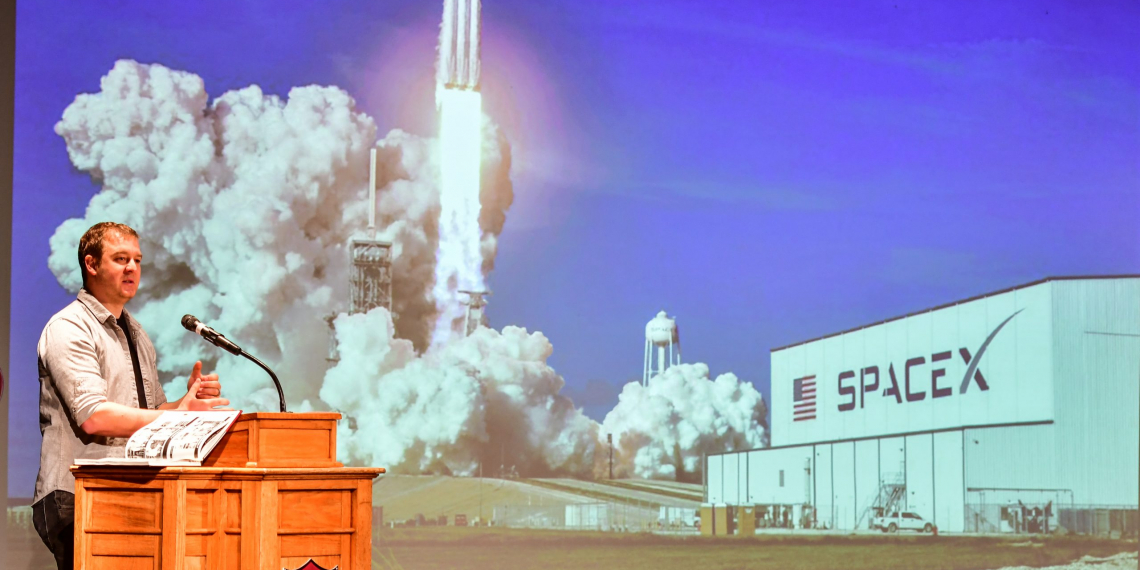 Earlier this year, TCS Director of Schools Dr. Catherine Stephens reached out to Heltsley to see if he would be available to speak to THS students. After initially attempting to schedule a virtual meeting, Heltsley noted that he would be in Tullahoma for the Thanksgiving holiday and would be able to make an in-person presentation at his alma mater.

“I can’t thank Will enough for coming to speak here at Tullahoma High School,” Dr. Catherine Stephens said. “His message was extremely relatable to students, and it is wonderful to see the success he has achieved in his career. Having him here allows our students to see first-hand what they can accomplish. His presentation was impactful to all who were in the audience and the question/answer session was my favorite. I’m so thankful he was able to be with us at THS.”

While at Tullahoma High School, Heltsley earned several honors and accolades and was even named the class of 2000 valedictorian. He was additionally a member of the National Honors Society and Mu Alpha Theta, a National Merit Scholar, scored a perfect 1600 on his SAT and was a USA Today All-American Award recipient. While at THS, Will was a marching band member and edited the high school newspaper.

Following his graduation from Tullahoma High School, Heltsley went on to earn his bachelor’s degree in mechanical engineering from the California Institute of Technology with honors. He then went on to earn his master’s degree in mechanical engineering from Stanford University. After earning his master’s degree, Heltsley spent three more years analyzing, building, and operating a test facility at Stanford to study ignition and combustion in supersonic crossflows. He has since published several papers on the subject.

In 2009, Will joined SpaceX and most recently served as the Vice President of Propulsion Engineering. He was responsible for the design, development, manufacturing, test and flight operation of the company’s portfolio of large liquid propellant rocket engines including the Merlin and Raptor engine families.

Heltsley and his team completed the first certification accrued flight of a commercially developed engine in coordination with NASA. Under Heltsley’s leadership, the Merilin Family achieved a test in-flight heritage with over 6,600 engine starts and half a million seconds of operating time across more than 650 engines. He also developed a highly reliable flight heritage of over 850 engine flights, a record that is unmatched by any other orbital-class engine in American history.

“We often talk to students about how they can do incredible things after they leave Tullahoma High School,” said THS Principal Jason Quick. “This high school provides a great learning ground for students to acquire skills and knowledge they’ll need to succeed. Will Heltsley embodies exactly what we are talking about when we say things like that. I can think of no better example as far as our alumnus base than Will Heltsely.”

From an early age, Heltsley knew exactly the career path he wanted to take after meeting an astronaut while he was a student at West Middle School. From that point, Heltsley set his sights on being an astronaut and did everything in his power to make that goal happen.

“Not everybody knows what they want to do, and that’s perfectly fine, but I did,” Heltsley said. “I wanted to be an astronaut. At the time, there were only two ways to do that, get a PH.D. to be a scientist or engineer, or you could become a military pilot. I wasn’t super interested in the pilot route, so I wanted to make sure that I could go to school, get my Ph.D., which would enable me to be an astronaut later in life.”

To make that goal achievable, Heltsely said he joined as many clubs as possible during his time at Tullahoma High School. Heltsley stated that he initially joined those groups to help him find ways to earn scholarships, but he found that those clubs and organizations allowed him to explore new interests.

“I tried to do as well as I could at those because I wanted to position myself to hopefully get scholarships to help me pay to go to college since I couldn’t afford that on my own,” Heltlsey said. “I was successful in that goal, and that really helped set the stage for what has been the rest of my career. In high school, and if you go to college, there are great opportunities to experiment in different fields, learn about new opportunities and join new clubs. Those things can open up your eyes to opportunities down the road that align with a goal that you already had, and maybe they even become your goal.”

Heltsely also noted that he met new people through those organizations, some of those who had completely different backgrounds than his own. Those meetings helped him in his career as he would become part of teams. Those new perspectives aided him in moving forward and allowed him to think outside the box.

“The real world is a lot messier, and sometimes problems are not going to be by the book,” Heltsley said. “Doing projects at school, like when I was a student here, helped tremendously. Those things teach you about planning and things that you have to change on the fly, analyze as you go along, and be open to ideas. It also teaches you how to work with people from different backgrounds with different ideas, adding a new perspective.”

Throughout his career, Heltlsey and his team have attempted to tackle obstacles and launches that were thought to be impossible. While there were frustrating moments, Heltsley stressed the importance of never giving up on a goal.

At SpaceX, Heltsley said he accomplished a lot, but one thing stands out more than others.

“The thing that I’m most proud of in my career is that we were the first commercial company to fly people and to fly astronauts,” Heltsley said. “Right now, SpaceX is the only way that the United States can get people to orbit. We are doing all of the crew rotations for the International Space Station with American and foreign astronauts. We also started doing commercial crews and private astronauts who have bought a flight. We take them up for a few days and take them down.”

“I don’t know if there’s a way to describe that feeling,” Heltsley said. “It probably feels like when you’ve beat or won something that you’ve been working so hard to win for so long. When we have a big new project that’s successful, it feels like all of the hours, blood, sweat and tears that you put in over the last 10 years have been worth it. It’s a real feeling of accomplishment.”