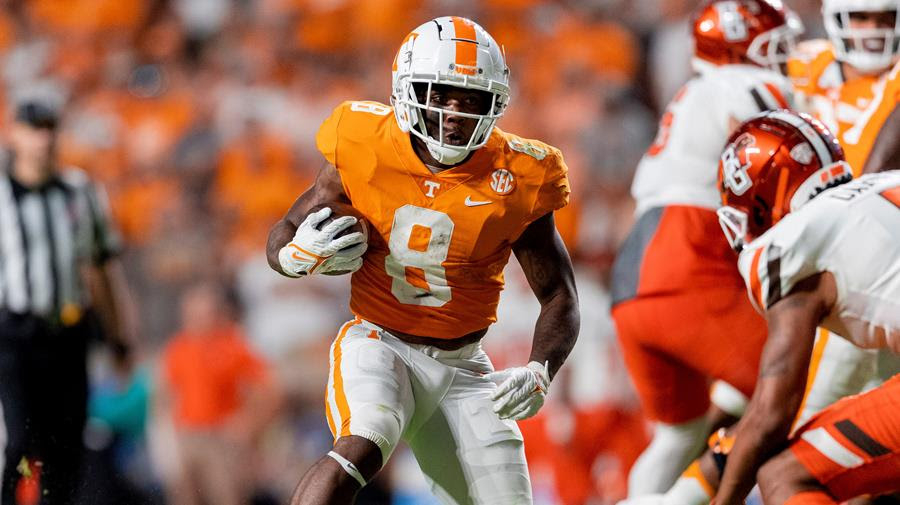 It wasn’t quite the offensive onslaught many of the 84,314 at Neyland Stadium expected but Tennessee overpowered Bowling Green (albeit on the ground) for a 38-6-win Thursday night to open the Josh Heupel era in Knoxville.

“I’m excited about the win,” Heupel said afterwards. “We have a ton of ways that we can and will need to improve out of this football game. Defensively, I thought we played with passion, played with effort and played with energy. We tackled relatively well in space. We did a really good job for most of the night. Offensively, there were times when we were clicking, handling things and played efficiently. At other times, there were simple things that we can control where we didn’t operate as efficiently as we can. We will need to clean those things up as we continue to move deeper into the season.”

Tiyon Evans (120 yards,1 TD) and Jabari Small (117 yards, 1 TD) each eclipsed 100 yards rushing as the Vols manhandled a Falcons defensive determined to stop the UT passing attack after some early Tennessee strikes. Tennessee out rushed Bowling Green 331-32 and Evans became the first Vol since Alvin Kamara in 2015 to record a 100-yard rushing performance in their Tennessee debut.

“I thought they pressed the line of scrimmage for most of the night,” Said Heupel. “They did a really good job of getting vertical, front-wise. They were a little bit different than some of the things that we had planned for. They adjusted to it, handled it and delivered blockers. I thought they took care of the football well tonight. Overall, I’m really pleased with their performances.”

The Tennessee passing game was more of a mixed bag, showing glimpses of promise, especially early, but struggling to be consistent throughout the night. Starter Joe Milton, making his UT debut, finished the night 11-23 for 139 yards and a touchdown. He also ran for 61 yards and 2 scores, was sacked 3 times and fumbled once.

“[Joe Milton] started well and then protection started breaking down, he’s scrambling around and doesn’t have his eyes in the right spot and misses someone running down the middle of the field. Everyone played a part in it,” Heupel said. “We’ll have a chance to go back and watch the tape. Guys are going to continue to improve. It’s the first time we played in the system inside of a live football game and it was in Neyland Stadium. There were a lot of really good things and a lot we can get better at too.”

The Vols now have 10 days to prepare before they face a much stiffer challenge when they host Pitt on September 11th in the Inaugural Johnny Majors Classic.  Kick off is set for 11 a.m. central and as always you can hear all the action LIVE on The Rooster 101.5, with Vol Network coverage starting at 9:30 a.m.!