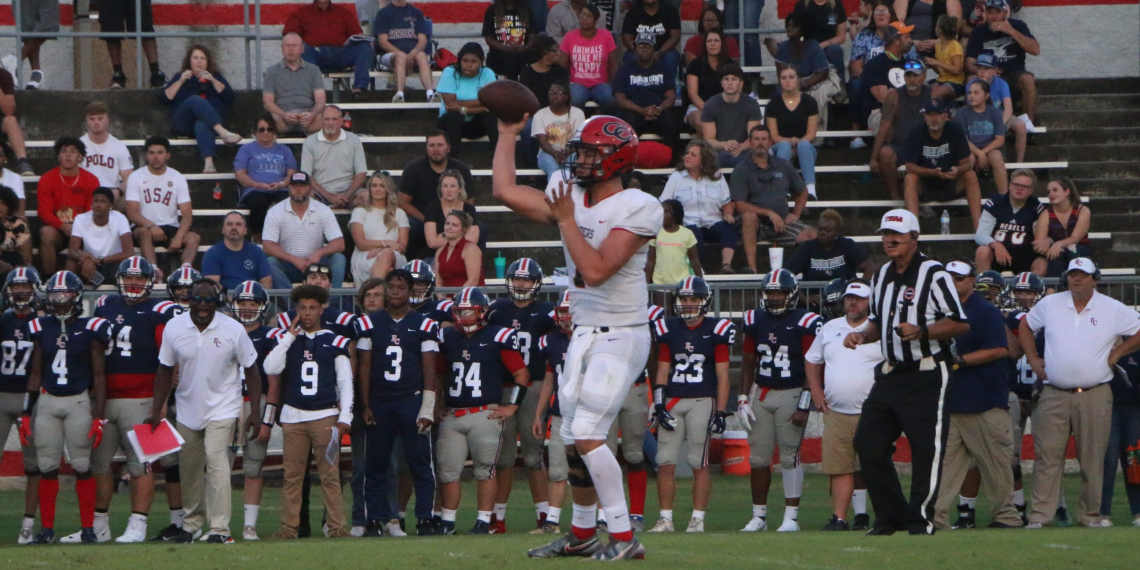 Through the Air, on the Ground and Defensively Raiders Beat the Rebels

The 2021 high school football season kicked off for the Coffee County Red Raiders at Franklin County Friday night. It didn’t take long for the Raiders to show out and then go on to win the game, 21-14.

Senior QB Connor Shemwell who was not expected to start the first couple of games of the season because of a knee injury he suffered during the basketball season, did get the start. With only one off the clock Shemwell showed he was back as he connected with the speedy Kelby Walker down Raider sideline for a 75-yard touchdown hook-up for the first score of the game. After Ian Weldon added the extra-point it was 7-0 Coffee County.

It was the start of a solid night for Shemwell – the Raiders’ senior signal caller who was just one day removed from medical clearance to participate after tearing his ACL in early March.

In the game heard live on Rooster 101.5 FM, Shemwell put together an outstanding night as he went 14-of-23 for 138 yards with 2 TDs. His other TD pass was to Co-Sir Pizza player of the game Jahlin Osbourne from 6 yards out. Oz has 6 catches for 47 yards, with most of those across the middle in heavy traffic. Shemwell also earned Co-Player of the Game honors.

The Coffee County run game was very strong as well. Lead by Junior Konor Heaton who ran for 123 yards on 30 carries including a 17-yard touchdown.

On defensive side of the ball the Raiders put lost of pressure on Franklin County’s QB Keandre Johnson forcing 3 interceptions. Freshman Cole Pippenger and Junior Ian Welden and Junior Kendall James all had one each in the win.

This Friday night is the home opener as Tullahoma comes to Manchester. This will be the 96th game between the two schools. The Wildcats hold the advantage of 62 wins to Coffee County’s 31 and there have been 2 ties. This will be the first high school game at Carden-Jarrell field with the new Raider Jumbotron in operation. Bowman On Target Marketing is the only place to hear two totally different broadcasts. Hear the Tullahoma broadcast on 93.9 The Duck with Scott Shasteen and Ken Keller and the Red Raider broadcast on The Rooster 101.5 with Lucky Knott and Mike Ray calling the action.

Top photo taken by Hunter Hobbs with the Manchester Times