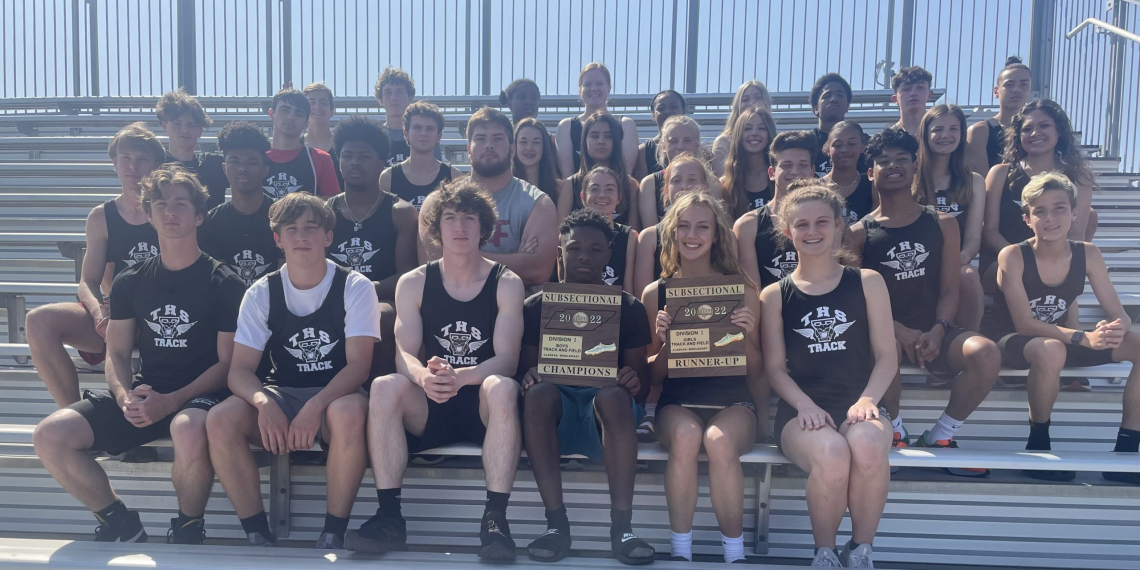 Tullahoma saw five individual athletes and three relay teams qualify for the TSSAA State Track and Field Championships based on their performances at sectionals last Thursday at Fairview High School.

Lily Storey, Cameron Robinson, Logan Crouch, Wesley Russell and Zane Hopf all earned their seats into the state meet after placing in the top two spots in their respective events. While the top two placers at each of the three Tennessee sectionals automatically qualified for state, two slots were left to fill and were determined based on performances at sectionals. The Lady Wildcats will be sending a 4×400 and a 4×800 relay team to state, while the boys team had a 4×200 relay squad qualify after placing in the top eight times across the state. The Class-AA TSSAA State Track and Field Championships will take place on Tuesday, May 24, at MTSU. Field events get underway at 9 a.m., with running events starting at 4 p.m.

“It’s really exciting that so many athletes qualified for state this year,” said THS Coach Maurice Shaw. “Those athletes just got through doing a workout at practice, and they are ready to go. I told them to hold it down though and try to contain themselves until next Tuesday when they can let it out.”

Hopf will have a busy week leading up to the TSSAA State Championships, and this Thursday and Friday, he will be competing in the TSSAA Class AA Decathlon. Hopf had previously finished first in the Middle Tennessee Class AA Sectionals to earn his spot in the state decathlon. He is the first Tullahoma athlete to qualify for the state decathlon since Kris Potts-Howard and Shamar Smith earned their seats in 2014.

The Class AA Decathlon will take place at Brentwood High School in Nashville and gets underway at 1 p.m. on Thursday with the 100-meter run, triple jump, discus throw, pole vault and 400 run. Friday’s portion of the decathlon begins at 9 a.m. and includes the 110 hurdles, high jump, shot put, long jump and 1,500 race.

“Zane is a pleasure to coach,” Shaw said. “He works hard every day and always gives it his best. Athletes like him don’t come around often. I’m just glad that we have another year with him since he is a junior.”

Storey narrowly took first place in the 800 run after clocking in with a time of 2 minutes and 19.57 seconds. The Tullahoma racer edged out Central Magnet’s Samantha Oulette by .06 of a second to take the top spot. This is the second time that Storey will be competing at the state meet after she qualified last year for the same event.

Russell also added a first-place effort at sectionals after clearing 11 feet in the pole vault. Cumberland County’s Jacob Atkinson was second in the event at 10-6.

Crouch placed second in the shot put after hurling a distance of 47-1. First place went to Greenbrier’s Paxton Maness, who put up a 48-11. This is the second-consecutive year that Crouch has qualified for state, and in 2021, he left Murfreesboro with a medal after taking fifth place in the same event.

Robinson added a second-place performance in the discus throw after tossing a distance of 131-6. Page’s Cole Combs took the top spot in the event at 144-6.

Hopf scored a second-place effort in the triple jump after leaping 39-8. Giles County’s Reed Owens won the event with a distance of 40-8.

Storey will also be competing in two other events at state. In the girls 4×400 relay, Ellie Uehlein, Eleanor Fults, Sarah Eakin and Storey teamed to take third place. The Lady Wildcats clocked in with a time of 4:19:06.

On the boys side, Tullahoma’s 4×200 relay team finished third at sectionals to make it to state. Logan Prosser, DeAndre Jenkins, Grant Allen and Andrew Ewing finished their race at 1:32.09.

Prior to sectionals, the Tullahoma boys team took home the Subsectional Championship, while the Lady Wildcats were runner-up.

“The THS track and field program has had an outstanding year,” said THS Principal Jason Quick. “All of the hard work they have put in daily is now paying off. Personal records are being set, and a few of our school records are soon to be eclipsed. I could not be more proud of Lilly, Logan, Zane, Cam and Wesley, as well as our relay teams. They truly represent the best THS has to offer.”