On back-to-back days, the Tullahoma High School wrestling teams made history and are sending a total of 20 grapplers to compete at the TSSAA State Individual Tournament, which gets underway in Franklin on Thursday.

“Having 20 wrestlers from our school at the state tournament says a lot about the quality of our wrestling programs,” said THS Principal Jason Quick. “Coaches Al and Jenna Morris have created a culture of excellence that inspires their student-athletes to become ideal role models for our student body. Each wrestler’s level of character and integrity is only overshadowed by their incredible heart. Our school is very fortunate to have them on the mat to represent Tullahoma.”

“It’s extremely exciting. The previous record for the program was seven, so to be able to send 10 wrestlers to state this year exceeds our expectations,” said Lady Wildcats’ Head Coach, Jenna Morris. “We have some wrestlers who can compete with anybody. They are right there neck-and-neck with some of the best in the entire state. To have five girls become region champions proves that they are the best in our region. There are only three other regions, so it proves that they can be one of the top four wrestlers in the state.”

While wrestlers were competing at the individual level, Tullahoma also collected some hardware as a team on Friday by capturing the Region Championship. As a squad, the Lady Wildcats combined to put up 195 points, beating second-place Cleveland, who totaled 179.5 points.

While her wrestlers received several accolades last Friday, Jenna Morris left Stone Memorial with an award of her own, as she was named the Region Coach of the Year.

“It’s awesome, but I tried to give it away because I don’t feel like I deserve it,” Coach Jenna Morris said. “It is flattering though, because I think people know that my focus is girls wrestling, and they know that I’m going to stand up and do what’s right to improve and grow this sport.” 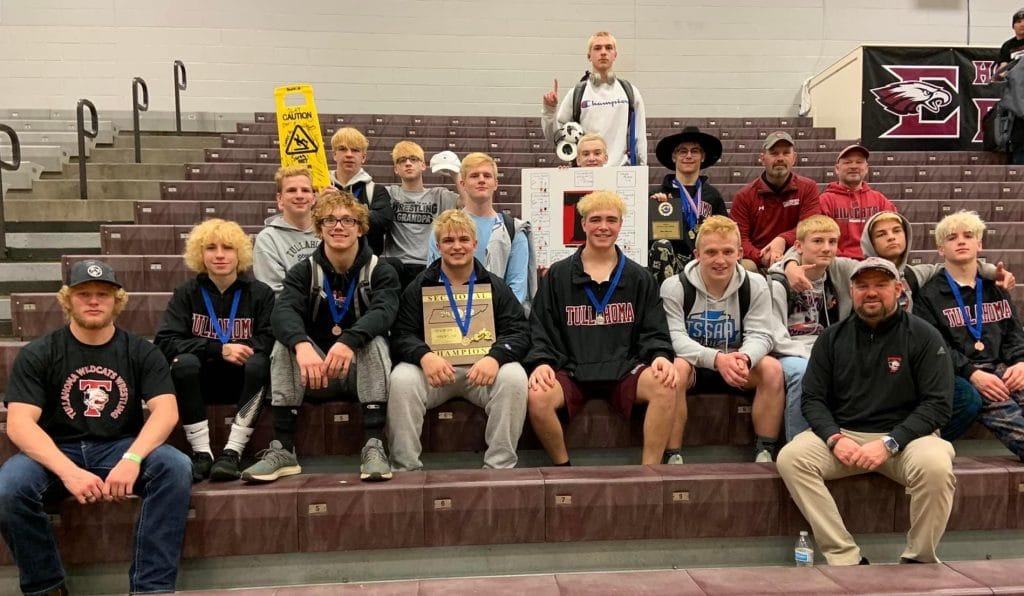 “It’s a good feeling. Anytime that you can send that many kids on to compete at the next level, it always makes practice that week leading up to state much more fun, that’s for sure,” said Wildcats’ Head Coach, Al Morris. “Getting to state is something that our kids have worked for all season, and they really earned this opportunity.”

The Wildcats also defended their Region Championship that they won on Feb. 12 and followed that with a Sectional Championship this past Saturday in Eagleville. As a team, Tullahoma combined to put up 166.5 points during the sectional competition, edging second-place Page, who tallied 161 points.

During the duals portion of the season, Tullahoma qualified for the state tournament for the seventh time in program history. Before punching that ticket to state, the Wildcats had earned a spot into sectionals during the region tournament after beating Eagleville. However, Tullahoma lost the regional championship match to Page. According to the Wildcats’ Head Coach, that loss turned into a teaching tool for his team.

“For us to have a group of kids who have bought in is just awesome,” Coach Al Morris said. “I really believe that you could see the kids start to gel together at the Soddy Daisy tournament, our last one of the year. Then during the region duals, you could see just how much they put into beating Eagleville to try to punch that ticket to the sectional duals. Page really took it to us during that next match. I think that was a learning lesson and eye-opening for these kids to know moving forward how to compete at a high level consistently.”

Looking ahead to the TSSAA State Tournament, both Tullahoma coaches are excited to get the wrestling underway. On the girl’s side, Jenna Morris said she thinks that several of her wrestlers could leave Franklin as state medalists.

“I expect our wrestlers to keep that same energy that they had at the region tournament,” Coach Jenna Morris said. “I want to see them continue to peak at the right time because that’s what it is all about. Many of our wrestlers have great draws, and I expect to see some runs for individual state championships. With 10 girls competing, I think we could be at the top of the team race as well. It will be really exciting to watch.”

On the boy’s side, Al Morris said he’s just ready to see his team go out and compete. Heading into the state tournament, the Wildcat coaching staff has preached to its wrestlers about taking it one match at a time.

“You just hope the best for your wrestlers at this point because that’s all you can do at this point,” Coach Al Morris said. “They have to go out and perform. If we can get our kids to be focused and take it one match at a time, I really think we can do pretty well down there.”

The TSSAA State Individual Tournament will take place at the Williamson County Agricultural Expo Park and gets underway on Thursday at 3 p.m. Wrestling will continue through Saturday afternoon. A full schedule for the state tournament can be seen here.