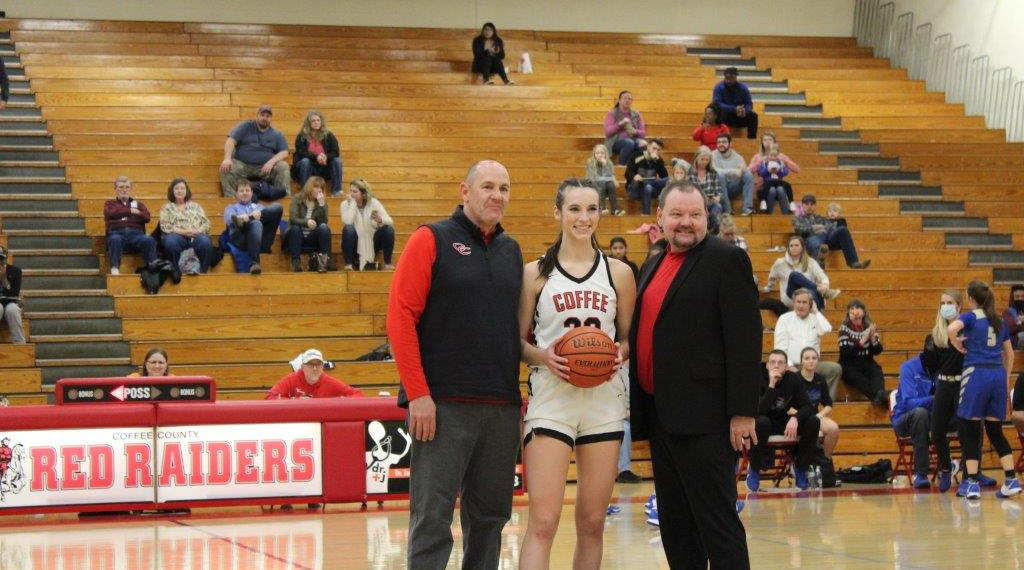 Coffee County’s Lady Raiders had a super night of basketball on Friday at home as they dominated the Shelbyville Eaglettes in District 8-AAA play.

The Lady Raiders held Shelbyville to only 2 points in the 1st quarter and the Eaglettes only managed 5 total points by halftime as Coffee County led 33-5.

In the 3rd things really got exciting as Senior Bella Vinson scored her 9th point of the night, but what made those points more important was Vinson scored 2,000th career point as a Lady Raider. The game was paused for a few moments to honor Vinson’s accomplishment. She was given a special ball by Head Coach Joe Pat Cope and her Dad and assistant coach Matt Vinson.

Coffee County went on to win the district game, 57-14. The Lady Raider defense held Shelbyville to single digit points in each quarter.

Vinson led the Lady Raiders with 16 followed by Jalie Ruehling’s 14, Elli Chumley’s 11. and Chole Gannon with 8.

Next up for the 22-1 Coffee County ladies will be against Lincoln County at home on Monday with tip-off set for 6 p.m.

On Friday night the Red Raiders boys team won in a nail biter over the Wildcats of Lawrence County, 47-46.

The Red Raiders trailed at halftime, going into the locker room down by 10 to the Wildcats, 30-20.

Head Coach Micah Williams inspired his team during the break to get the Coffee County boys back on track as the Red Raiders came back in the second half dominating the court with a strong offense and defense.

Trenton Scrivnor led the way in scoring for the night notching 16 points in the game. Jaxon Vaughn along with Kyle Farless posted 12 points each.

Farless hit the big shot of the night as he hit a three-pointer with less than 10 seconds to go earning him the Crazy Daisies Player of the Game.

Lawrence County got the ball back with less than 6 seconds go but were met by a strong Red Raider defense as the clock ran out for 47-46 exciting District 8-AAA win.

The Coffee County boys hit the court again Saturday night at 6 p.m. in a boys’ only district game at Franklin County High School.

Tullahoma Splits with Columbia on Friday