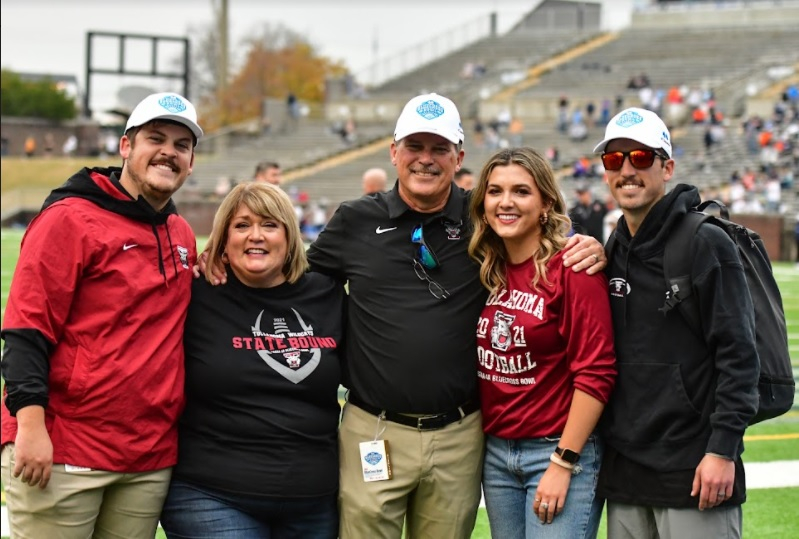 After 29 years at the helm of the Tullahoma football program, John Olive announced Sunday that he would be stepping down as head coach of the Wildcats.

In his final season as the Wildcats’ coach, Olive and his players captured their first-ever state title after winning the Class 4A Championship in a 21-14 in a double-overtime thriller over Elizabethton. Tullahoma finished the year with a 15-0 record, the program’s first-ever undefeated season.

“John Olive is Tullahoma High School and the community of Tullahoma,” said THS Principal Jason Quick. “I’ve never met a person who has served a community and high school program with more integrity and character than John Olive. It is evident in our school, not just with the football team but also throughout all of our school. Whether you are an athlete or not, John has had an impact on you in some form or fashion.”

Olive took over the Wildcats program in 1993. During his 29 seasons in Tullahoma, Olive’s teams combined for a 203-126 record, and he finished his coaching career with an overall mark of 229-141.

When he first took over as the Tullahoma coach, Olive admitted that he planned on staying for a short time. However, he and his family embraced the community, and they chose to remain in Tullahoma. In 2015 and 2016, the Wildcats went winless in back-to-back seasons. Olive said he is incredibly grateful that the TCS administration allowed him and his staff to continue coaching in 2017.

“I had envisioned myself here in Tullahoma for four or five years,” Olive said. “We stayed because of the group of friends that we have here. The Tullahoma community itself has been awesome to my family and to myself and our church has been great. To survive back-to-back seasons, where we couldn’t win a game, is rather miraculous in itself, particularly in this day and time. It meant a tremendous amount to me that the administration and the community still believed in us as coaches.”

Tullahoma ended that winless streak in the first game of the 2017 season with a 37-29 win at Shelbyville. The Wildcats finished that year with a 5-5 record, just missing the playoffs.

“We went 5-5, but we were a pretty good football team,” Olive said. “We took Marshall County and Maplewood to the wire. That proved to us that we could still win and that we still knew what we were doing as coaches.”

Olive described the last four years as nothing short of a blast for him and his coaching staff. In 2018, the Wildcats made it to the quarterfinals of the playoffs before returning to the round in 2020. That culminated with the program’s first-ever state championship on Saturday.

“The last four years have been special,” Olive said. “To win the state championship in your final season, that’s a fun way to end your career.”

TCS Director of Schools, Dr. Catherine Stephens enjoyed Olive’s last two seasons, a stretch that saw Tullahoma combine for a 27-1 record. The only blemish during that period was a 15-14 loss to Nolensville in the 2020 playoffs.

“I am thankful to John for his leadership and especially for his commitment, service and dedication to the THS football program over the last 29 years,” Dr. Stephens said. “What an exciting journey he has had, and the state title is certainly a remarkable way to conclude his football coaching career with THS. It has been thrilling to enjoy my first two years as superintendent with this amazing group of senior athletes. Congratulations to Coach Olive on a remarkable football coaching career and a magnificent, historical football state championship win.”

More unique to Olive is that he had his sons, Jared and Caleb, on his coaching staff for the last five seasons. According to Olive, having his two sons by him and the rest of his coaches and staff helped extend his career.

“It’s hard to quantify just how much these coaches have meant to not only me but this program,” Olive said. “They are men who have put in so much time and effort. Whether they are coaching in the weight room, serving as trainers or helping with travel or equipment care like Ricky Christy and his crew, they are all indispensable. It’s hard to believe that it takes so many people to make a program like this function, but it does.”

Olive also thanked his wife, Cherie, for allowing him to follow his passion of being a high school football coach.

“My wife is a jewel,” Olive said. “Coaching is a seven-day-a-week job, and Cherie lives like a divorcee during four or five months of the year. When we were younger, and our kids were little, she had to take care of them by herself because her husband was working 80-90 hours a week.”

Lastly, Olive pointed out that none of his success would be possible without the players that have come through Tullahoma. Win or lose, Olive hopes the THS athletes over the last 29 years learned something to carry with them throughout the rest of their lives.

“I hope that every young person who has come through our program gained something positive out of their experience,” Olive said. “These young people are the reason that we choose to teach, to coach and to invest. I hope we created an experience that had a positive impact on their lives.”