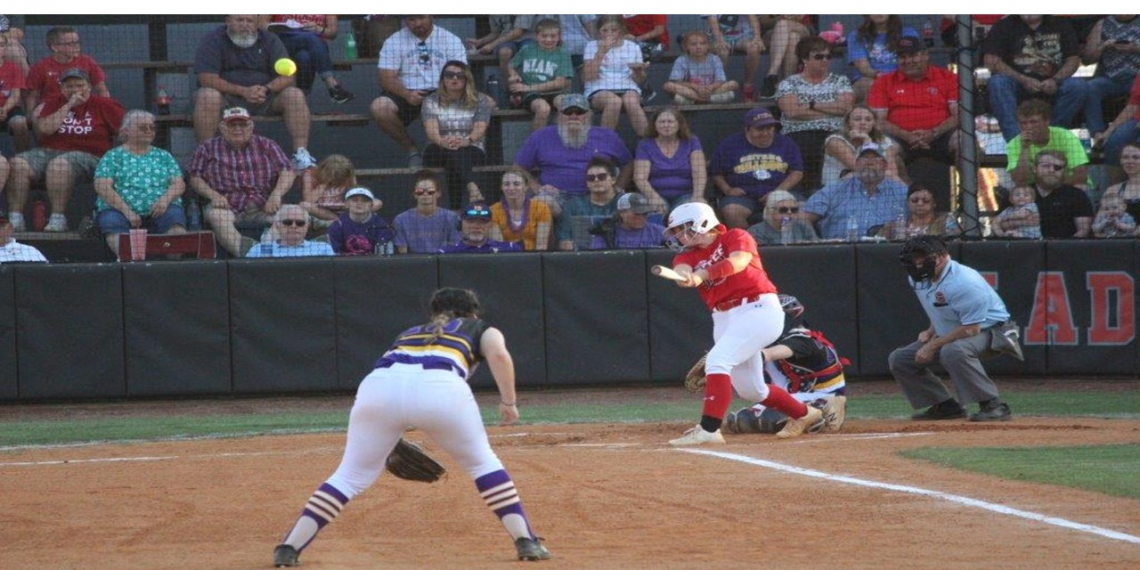 Friday night at Terry Floyd Field the Coffee County Lady Raiders earned their second straight trip to the TSSAA state tournament with a 7-2 win over the Smyrna Lady Bulldogs.

Coffee County got the scoring started early as Kiya Ferrell led off the bottom off the 1st with a triple. She scored on a passed ball.

In the 2nd Kaitlyn Davis hit her first of two homeruns on the night to up the Lady Raider advantage to 2-0.

In the 3rd Smyrna scored twice on an error to tie the game at two apiece.

Kaitlyn Davis hit another solo homer in the 4th to give Coffee County the lead 3-2, a lead they never gave up.

The Lady Raiders would secure the win in the 6th. Paisley Campbell knocked in 2 runs on a single to centerfield. Emily Schuster and Riley Phillips who were pinch running. Jada Bowen then chased home a run on a ground ball that scored Madison Pruitt who was pinch running. Chesnie Cox hit a fly ball to that the leftfielder dropped and pinch runner Ava McIntosh scored to make it 7-2.

Coffee County’s defense and Davis shut the door on Smyrna in the 7th. After a single by Lora Turner, Emma McDonald lined out to Channah Gannon at third and she threw it to first to catch Turner off the base at first for a double play. Davis would then strikeout Anna Lay to end the game and send the Lady Raiders back to the state tournament for the second year in a row. Davis was named the Sir Pizza Player of the Game.

Coffee County finished runner-up last year in Class AAA, but this year they’ll compete in first-ever Class AAAA tournament. The Lady Raiders (24-14) will play their first game in this year’s state tournament on Tuesday at 5:30 PM against Springfield (29-4). Rooster 101.5 FM will provide coverage beginning at 5:20 PM. Game 2 is set for 11:30 AM on Wednesday morning. The tournament is double elimination. Not only can you hear the action on the radio, but also at rooster1015.com or the Rooster 101.5 app.