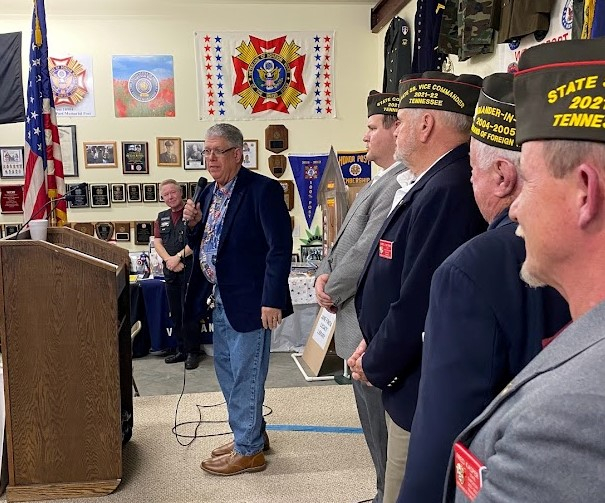 A capacity crowd was in attendance for the Veterans of Foreign Wars All-American Post 10904 Community Awards banquet, held February 14 in the Coffee County Veterans Building. Among those attending were Coffee County Mayor Gary Cordell, VFW State Commander Brian Walker and several other officers with VFW Department of Tennessee.

Four new VFW Life Members were welcomed to the Post.

In addition to the outstanding teachers in our area, several local students won the annual VFW essay competitions. Katherine Clark, an 8th Grade student at Temple Baptist School, topped 64 Patriot’s Pen essay competition submissions. She read her essay aloud to those in attendance, who were so inspired by her essay that she received a standing ovation.

Andrew Hetrick, a Senior at Coffee County Central High School, was awarded First Place in the Voice of Democracy essay competition among the 16 entries at the Post level; and First Place at the District level, where his submission was judged the best among the winners from ten VFW Posts. He read his essay aloud and also received a standing ovation. Recently awarded the rank of Eagle Scout, Hetrick also received the VFW Post 10904 Scout of the Year Award.

Lloyd Smith closed the event with “God Bless The USA” as attendees sang along.

Top photo: Llyod Smith performs one of his songs to those in attendance.