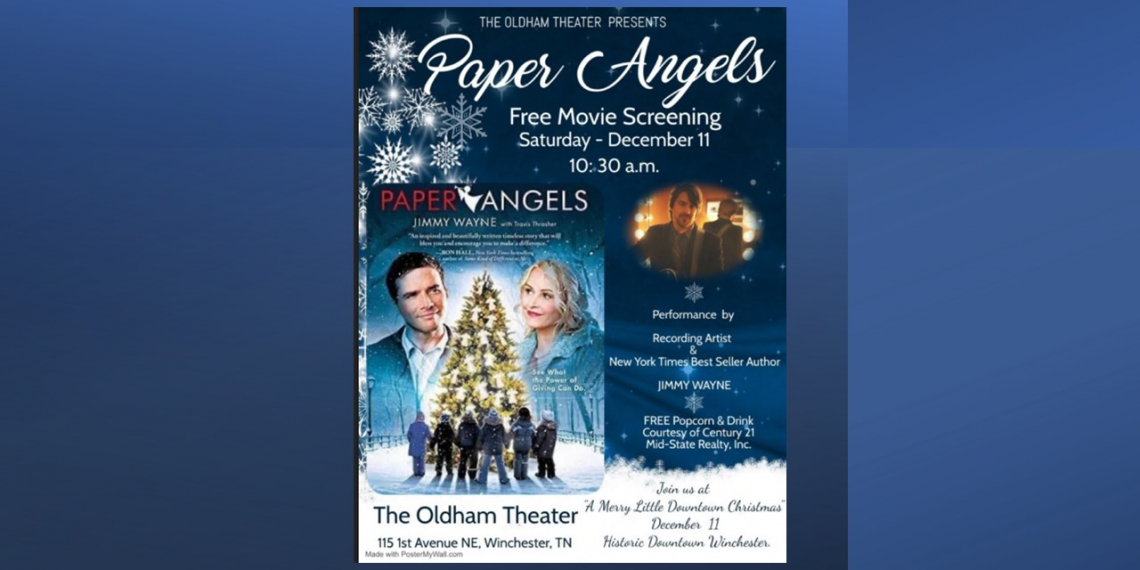 Jimmy Wayne wrote his holiday hit “Paper Angels” in 2001. It was the first song he wrote after signing his first career record deal with DreamWorks. The song is inspired by his own experience of having been a recipient of the Salvation Army “Angel Tree” program as a child. This year marks the 20th birthday of the song which became a book in 2011 and a made-for-television movie in 2014.

This year the city of Winchester, Tennessee is anchoring its “A Merry Little Downtown Christmas,” also celebrating 20-years, with a special red carpet and free-to-the-public viewing of Jimmy’s Paper Angels in The Oldham Theater on Saturday, December 11.

Beth Rhoton, Winchester City Administrator and owner of the historic theater says, “We’re thrilled to have Jimmy’s film playing in our theater! It’s fantastic that our celebration and his song’s 20th birthdays are both this year. It makes this event all that more special.”

The viewing is sponsored in part by Pam Peck, owner of Century 21 Realty LLC, who has graciously donated the popcorn and drinks for all attendees. “We’re all big fans of Jimmy and how he speaks for foster youth,” says Pam. “We know this movie is special because it inspires everyone who gets to see it and that inspiration is what we wanted to share at our event this year. It’s the perfect pairing!”

“I’m honored The Oldham Theater selected Paper Angels to feature during its 20-year anniversary event,” says Jimmy. “When I wrote ‘Paper Angels’ I knew it was a special song but looking back over 20 years I’m blown away by how many people it’s inspired to give back whether through the Salvation Army’s ‘Angel Tree’ program, or through other charitable organizations. That spirit of giving is what matters most to me.”

The red carpet will take place in front of The Oldham Theater: 115 1st Ave NE, Winchester, Tenn., followed by the viewing.

A schedule for the morning’s event is below:
9: 45 AM Red Carpet Media Interviews with Jimmy Wayne and other guests
10:15 AM Red Carpet finishes
10:30 AM Jimmy welcomes attendees, discusses the “Paper Angels” song, book and movie, and performs “Paper Angels.”
10:45 AM Viewing Begins
12:00 – 12:30 PM Movie ends. Audience exits theater for outdoor photo opportunities

Following the movie and photos, attendees can participate in the free activities going on all day on the square as part of “A Merry Little Downtown Christmas.”

1987: The Salvation Army gave him his first guitar

2001: After earning his first record deal, the first song he wrote was “Paper Angels”

2013: The House of Representatives of the 108th General Assembly of the State of Tennessee, the Senate Concurring, that “we hereby join the good people of Tennessee as they celebrate “The Salvation Army Angel Tree Day” on December 1, 2013

About Jimmy Wayne:
Having recently celebrated the 11-year anniversary of finishing his walk halfway across America (Project Meet Me Halfway) to raise awareness of the plight of more than 30,000 children in foster care, Jimmy, a former foster kid turned award-winning country recording artist and New York Times  bestselling author of Walk To Beautiful. Jimmy’s songs and story highlight his mission to raise awareness for these forgotten youth.

Jimmy’s hits include “Stay Gone,” “Paper Angels,” “I Love You This Much” and “Do You Believe Me Now,” which earned BMI’s prestigious Million-Air Award for receiving more than one million radio spins in America. In 2009, Jimmy toured with Brad Paisley and recorded “Sara Smile” with Rock and Roll Hall of Fame duo Daryl Hall and John Oates.

In 2005, Jimmy became the youngest recipient of The William Booth Award, one of the highest honors that may be conferred upon an individual by The Salvation Army.

In 2012, Jimmy lobbied to pass legislative bills extending the age of foster care from 18 to 21 in California and Tennessee.

In 2014, Jimmy’s first film, Paper Angels (UPtv) became an instant holiday classic and in 2014 he released Walk to Beautiful: The Power of Love and a Homeless Kid Who Found the Way (Thomas Nelson/Harper Collins) which became a three-time New York Times bestseller, crossing the 170,000 sales milestone in early 2019, and becoming a #1 Bestseller at Amazon.

In 2016 Jimmy received the prestigious Points of Light award from President George W. Bush (41), while simultaneously contributing to the extension of foster care services from age 18 to 21 in North Carolina and Ohio.

In 2017, Jimmy was honored with the inaugural Community Maker award by Verizon and received an honorary Doctorate of Humane Letters from William Woods University. In 2018 he received an honorary Doctorate of Fine Arts from Cal State University San Marcos and most recently, (May 2019) he was honored by the National Council for Adoption with the Warren and Mary Alice Babineaux Award in recognition of his continued commitment to creating positive change in the lives of children in foster care who need permanent families.

Jimmy has shared his story — The Power of One — around the world as a keynote speaker and has performed on the Grand Ole Opry stage 224 times. He lives in Nashville and continues to give back through his non-profit awareness campaign, Project Meet Me Halfway. For more about Jimmy Wayne, visit www.jimmywayne.com.