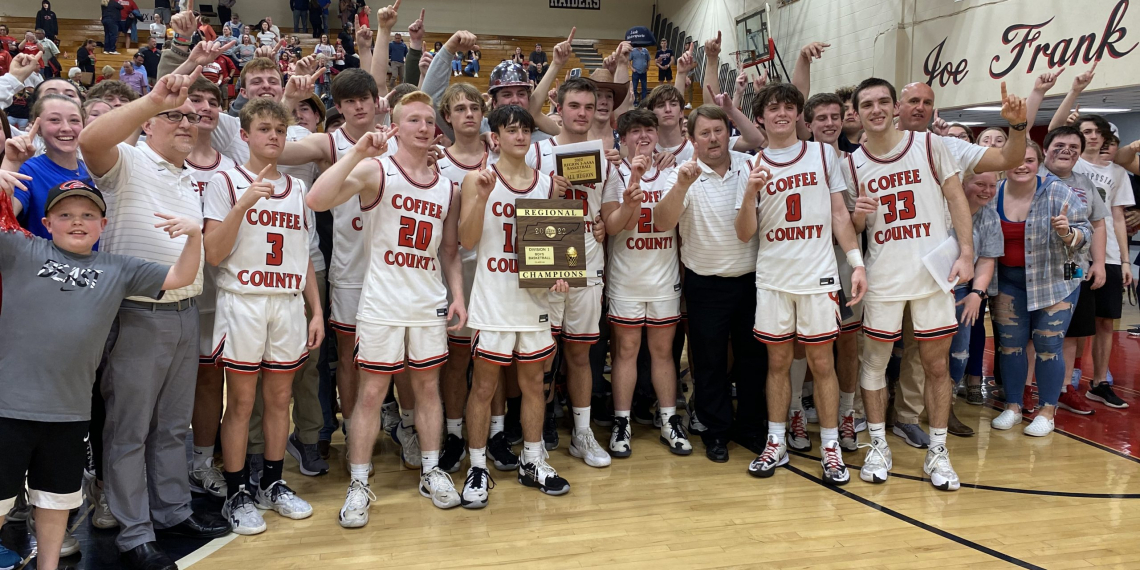 On Thursday night the Coffee County boys’ basketball team was in a position that they had reportedly not been in for many years, a chance to win a region championship. After 2 overtimes the Raiders are your Region 3-4A Champions. Coffee County got their history making win over Walker Valley 51-46.

Next up will be Stewarts Creek in Sectional portion of the TSSAA playoffs on Monday night at “The Patch” beginning at 7 p.m. The Red Hawks lost to Cane Ridge, 89-61 on Thursday night. A win by the Raiders on Monday will put them into the State Tournament for the first time since 1965.

The Red Raiders took an early lead in the game, but saw the Mustangs grab the advantage about mid-way through the first quarter and they never gave it up through regulation.

Coffee County was in a difficult spot to begin the 4th quarter trailing by 10. The Raiders roared back behind the hot shooting Dayne Crosslin and great defense.

With the game tied at 44, Walker Valley decided to play stall ball for almost the entire 2 minutes. They got two shots up in the final 10 seconds, but neither shot was clean as Coffee County played great defense and the game headed to overtime.

In the first overtime both teams only managed 2 points each, so it was off to overtime number two.

The Raiders took over on the boards and defense as they shut down as they held the Mustangs scoreless and picked up the 5-point win to improve to 23-9.

Region tournament MVP Dayne Crosslin led the Coffee County attack with 20 points (including four 3’s) followed by all-tournament selection Connor Shemwell with 14. Others scoring for the Raiders were Brady Nugent with 6, Phinehas Rollman with 5, John Dobson with 3, Aidan Abellana 2 and Jackson Shemwell 1. Nugent and Rollman were also name all-tournament.

Be sure to tune into The Rooster 101.5 FM as Coffee County plays host to Stewarts Creek on Monday night, airtime 6:50 p.m.