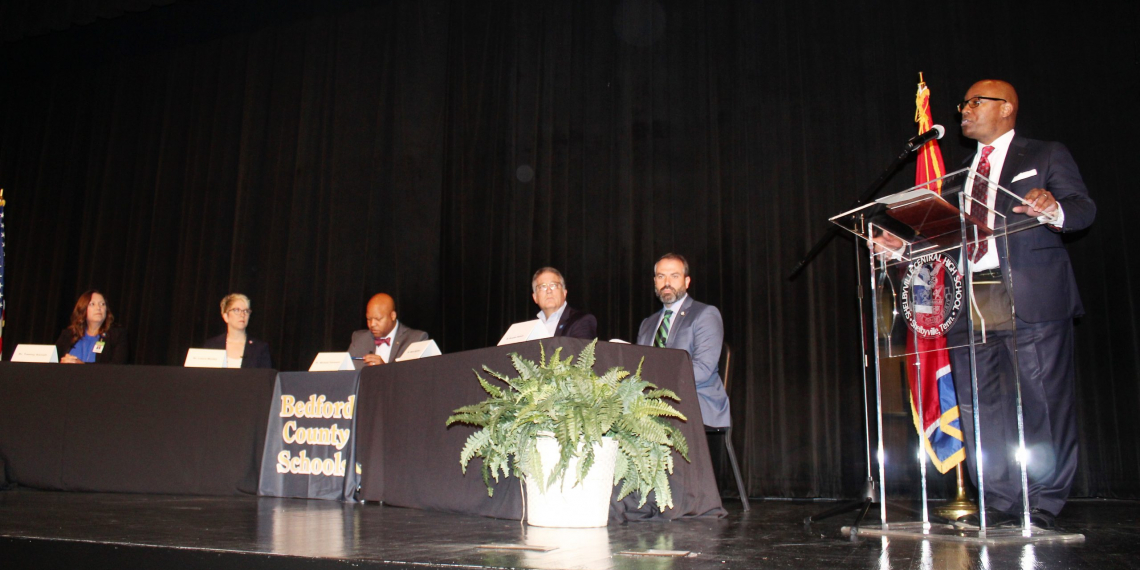 “We want this to be a partnership,” said Bedford County School Superintendent Tammy Garrett, who told educators, “We want the employers to hear your voice as well.”

County Commissioner Greg Vick played a key role in organizing the event, and County Mayor Chad Graham, at the end of the event, thanked all of those who participated and attended.

“You are about to have the most state-of-the-art higher education center in the state,” he said, referring to the new $42 million TCAT-Shelbyville campus which will be built in 231 North Business Park.

Monks said she’s excited about the ongoing partnership between TCAT-S and the county school system. She described the excitement of a Community High School student taking welding classes at TCAT-S. Advanced placement courses allow a high school student to earn post-secondary credits while still in high school, giving them a head start. Advanced placement classes are often thought of in terms of general education subjects like English or science, for university-bound high school students, but Krause said the same concept can be applied to career and technical education (CTE) subjects.

There are also partnerships between the three higher education facilities represented on the panel, allowing someone to earn an associate degree at Motlow, for example, and then transfer seamlessly into a bachelor’s degree program at MTSU.

Hudson said that for such partnerships to work, there must be relationships, not only between institution presidents, but between educators from the participating institutions.

Burns noted that employers are seeking discipline-specific skills but also “soft skills” such as proper dress and work habits. Work ethic and attendance were brought up by several of Thursday’s speakers.

Torrance talked about “new-collar” jobs that require technical skills. He also praised the hiring of Shane Hooper, who is the community’s industrial recruiter, working for the Shelbyville-Bedford County Partnership, a joint city-county effort.

“We need to pay teachers what they deserve,” said Garrett. “There is a huge teacher shortage.” Garrett discussed the problem of Bedford County losing teachers to systems such as Murfreesboro and Rutherford County but Burns said even those systems are finding it hard to fill all their positions.

Hudson noted that many children have inadequate support systems at home, putting more burden on educators to get the children ready to learn.

For the next panel, Krause led a discussion with State Rep. Pat Marsh of Shelbyville, who serves as speaker pro tem for the Tennessee House, and Rep. Mark White of Shelby County in West Tennessee, who chairs the House Education Committee.

Marsh discussed the process that led to the state to approve funding for the new TCAT campus, after he and State Sen. Shane Reeves kept asking for the facility.

“When [the state budget] finally came out,” said Marsh, “it was on the list – to my shock, and to Shane Reeves’ shock.” Marsh said the facility would be “the front door to our community.”

White said that Marsh was being “humble” in describing his efforts, saying that Marsh is held in high respect in the General Assembly.

White said that while no one would have wished for the events of the past year and a half, they’ve caused educational institutions and leaders to take a second look at how they operate, which can sometimes lead to productive change.

Hatfield said that industrial site decisions used to be all about location and incentives – but now, available workforce is much more of a factor.

“Where are the people,” site selection personnel ask, “and how can I get ‘em?”

“We have roots here,” said Morton, “we have facilities here, but we have to have the workforce.”

Mann said that automation “has changed our labor force, but not eliminated our labor force.” High-tech robotics have transformed factories, but they still require human beings to operate, maintain and repair them, and to provide quality assurance.

Johnson said that Musgrave’s e-commerce efforts have been redoubled during the pandemic, leading to new jobs in that area and other forms of information technology.

All of the industrial participants stressed the need for work ethic and attendance among employees, and urged the teachers in the audience to find ways of conveying this to their students.

Weaver noted that Uncle Nearest, building an industry from scratch, has hired people from fields different from their new responsibilities – but knew that they had the required work ethic, flexibility, and ability to learn.

Weaver also said the distillery was excited about the potential from having TCAT, which can design training programs to meet specific industrial needs, a short hop away from its facility.

A video of the summit can be viewed at https://youtu.be/2epYbGgymOY