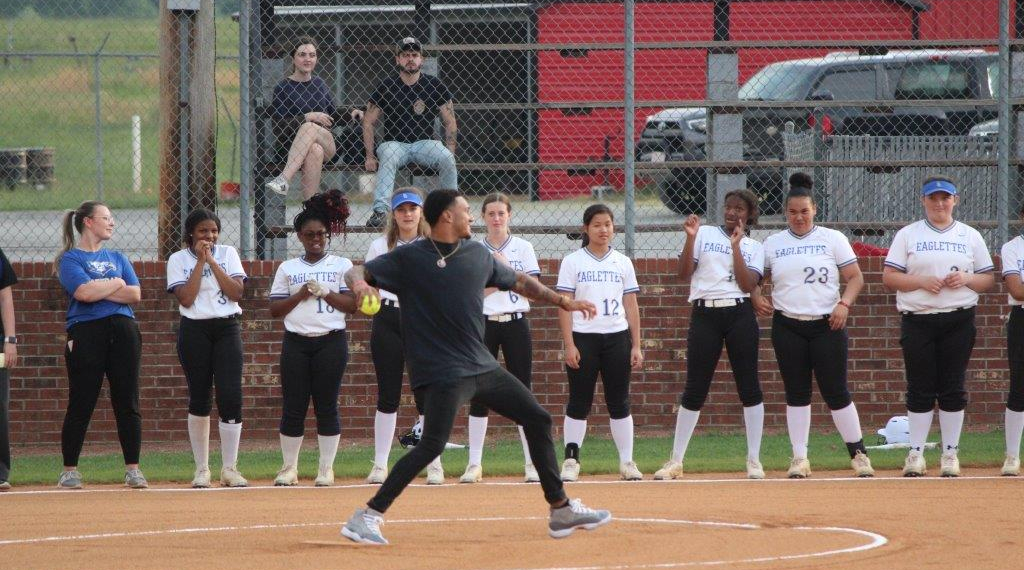 The excitement got started before the game began as former Coffee County Red Raider and Tennessee Vols football star Alontae Taylor was on hand to throw out the first pitch. Taylor was drafted last week in the 2nd round of the NFL draft by the New Orleans Saints.

After the pre-game festivities the Lady Raiders went to work. Channah Gannon, Kiya Ferrell and Haidyn Campbell all homered on Thursday night at Terry Floyd Field as Coffee County powered past Shelbyville in the District 6-4A softball tournament.

The Lady Raiders were up 4-0 in the third inning when the Eaglettes scored three runs on a bases loaded hit by Kaydence Rippy.

Coffee County pressed on the gas after the Shelbyville rally. The Lady Raiders scored one in the third, five in the fourth, one in the fifth and two more in the sixth for a 13-3 run-rule win.

Kaitlyn Davis got the win in the circle for Coffee County going all six innings, allowing three runs on six hits, striking out four and walking one.

The Lady Raiders collected 15 hits in the game. Ferrell was 4-for4, 3 RBI and she scored twice. Jada Bowen was 3-for3 with 2 runs scored. Madison Pruitt went 3-for4, 2 RBI and scored once. Gannon had 2 hits and 4 RBI.

Alyvia Smith went 2-for-3 at the plate to lead Shelbyville in hits.