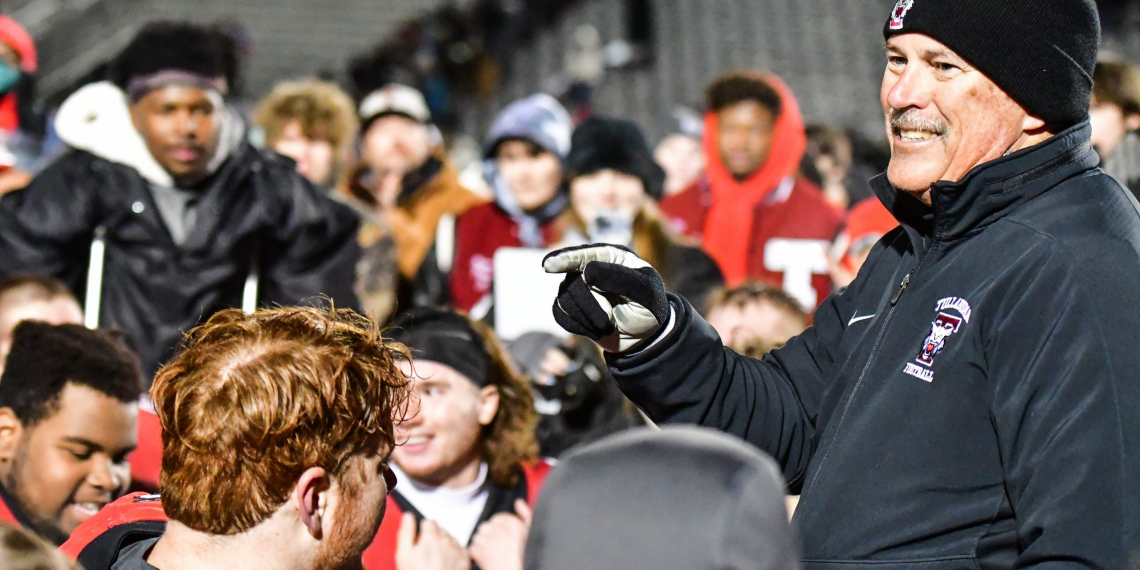 Dreams Do Come True! History Made! Wildcats to play for State Title on Dec. 4

Tullahoma made history on the football field and locked up its first-ever berth into the TSSAA Class 4A State Championship Game following a 44-19 victory over Haywood on Friday.

After defeating the Tomcats, Tullahoma will take on Elizabethton at Finley Stadium in Chattanooga on Saturday, Dec. 4. The Fighting Cyclones earned their seat in the state championship after beating Upperman 23-6 on Friday.

“This is awesome,” said Tullahoma Head Coach John Olive. “This is what you work for all year long for. We now have an opportunity to play for the state championship. It’s pretty exciting, but we know that we are going to be playing a two-time defending state champion in Elizabethton.”

Tullahoma found itself down early during this past Friday’s semifinal matchup. Haywood struck for the first score of the game and grabbed a 7-0 advantage. Quarterback Cordero Walker hit Jaylen Lewis for a 12-yard touchdown with 9:08 left in the first quarter.

The Wildcat defense forced a punt on Haywood’s next possession, and a 37-yard punt return by Krys Uselton gave Tullahoma the ball at the Tomcat 30-yard line. Shortly after that, Tullahoma tied the ballgame at 7 when KeiShawn Cummings scored on a 3-yard touchdown run with 4:40 remaining in the opening period.

Haywood answered back with nine-straight points to grab a 16-7 advantage. Reid Russell first drilled a 33-yard field goal for the Tomcats. Lewis then broke free for a 53-yard touchdown, and Haywood missed the extra-point attempt with 7:40 remaining in the second quarter.

Tullahoma quickly cut into its deficit with a two-play possession. Uselton was able to break free for an 80-yard touchdown run to make the score 16-14 with 7:17 left in the second period.

Landon Foutch intercepted a pass on the Tomcats’ next offensive drive to give Tullahoma possession. The Wildcats quickly turned that into points as quarterback Ryan Scott hit Jacob Dixon for a 63-yard touchdown with 5:47 remaining in the first half. The extra-point attempt was no good, and Tullahoma led 20-16.

With 55 seconds left before halftime, Russell drilled his second field goal of the contest. The Hayward kicker connected on a 36-yard kick to cut the score to 20-19 heading into the break. That was the final score of the game for the Tomcats.

“Overall, I thought our defense played really well,” Olive said. “They are a heck of an offense. For our defense to shut them out in the second half, that was impressive. Coach Coy Sisk and his staff had a great plan. Once our players got used to seeing their offense, we were able to execute the plan.”

Tullahoma opened the second half with a touchdown drive and opened up a 27-19 lead. Dixon scored for the second time after he and Scott connected on a 22-yard pass left with 9:29 in the third quarter.

Eleven seconds later, A fumble recovery allowed Tullahoma to open its lead up to 34-19. Ethan Anderson forced the Haywood turnover, and Brandon Painter scooped up the ball in the end zone for the Wildcat touchdown.

Tullahoma kept padding its lead, and with 3:53 left in the third quarter, Justus Chadwick made a 30-yard field goal to put the Wildcats up 37-19. Chadwick is one of three finalists for the TSSAA’s Kicker of the Year honor, which will be awarded on Dec. 7.

With 3:10 remaining on the clock, Tullahoma added its final score. Scott held on to the football and punched it into the end zone from a yard out to make it a 44-19 contest on a quarterback keeper.

“We had to start using our passing game last week because we are playing teams who are just as physical as we are,” Olive said. “We really felt like we were going to be able to throw the ball against Haywood tonight. Once we got the jitters out of us, I felt like we moved and passed the ball really well. Once we had them where they had to defend the pass, that opened up the running game.”

With Friday’s semifinal contest in the rearview mirror, Tullahoma (14-0) is getting geared up for a trip to Chattanooga to play Elizabethon (12-1) on Saturday, Dec. 4. Kickoff for the Class 4A Title Game is scheduled for 10 a.m. Central Time. Fans can pre-purchase their tickets here.

“We are excited to be going to Chattanooga. This is what you want,” Olive said. “These young men have been good enough to get us there, and hopefully, we’ll find a way to go beat Elizabethon.”

You can hear all the action on the home of Wildcat Sports, 93.9 The Duck beginning at 9:30 a.m. Saturday morning.

Top Photo: Head Coach John Olive is all smiles after his team earned the right to play for the Class 4-A state championship.

Chadwick a Finalist for Mr. Football Kicker of the Year