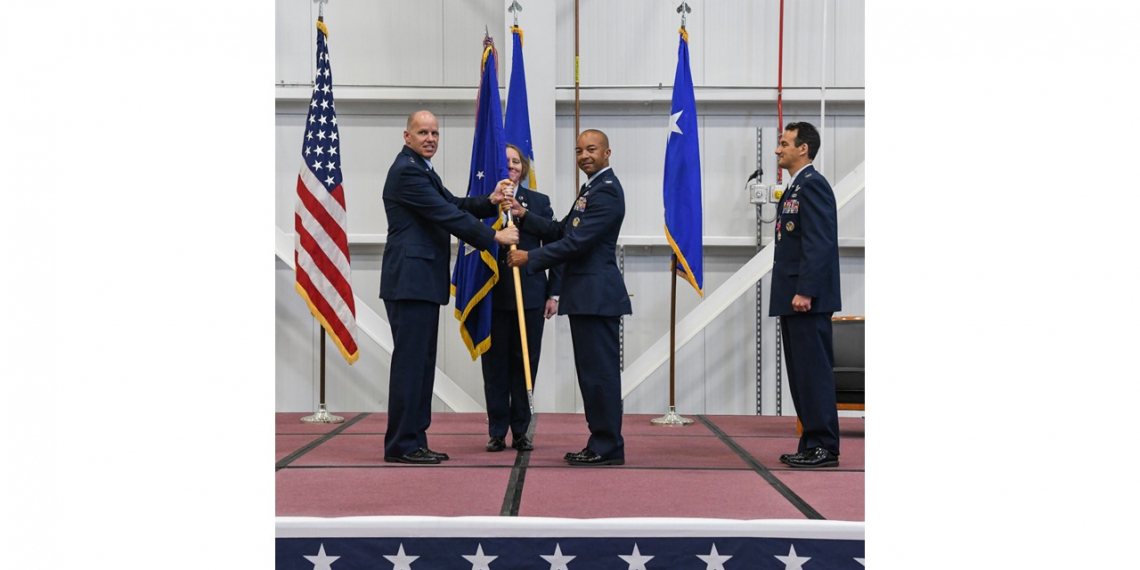 Col. Randel J. Gordon assumed command of the Arnold Engineering Development Complex as the 32nd commander during a Change of Command ceremony June 16 in the Aircraft Test Support Facility at Arnold Air Force Base.

Gordon comes to AEDC from Edwards Air Force Base, California, where he was the Vice Wing Commander of the 412th Test Wing. In that role, he led a wing of more than 9,000 personnel in the developmental test and evaluation of various aircraft and emerging technologies.

After accepting the AEDC guidon to signify the assumption of his new post, Gordon took the podium. He said it is an honor to take on the mantle of leadership for AEDC and that the two words that come to mind when reflecting on the path that brought him to his new assignment and looking ahead were “gratitude” and “excitement.“

Gordon expressed his appreciation for Dertien, Col. Jeffrey Geraghty, his predecessor in command of AEDC, Geraghty’s family, members of his own family, friends and others he has served alongside during his Air Force career, many of whom were in attendance for the ceremony.

“You think that I invited you all here to honor me but, in reality, I invited you here to honor you because it’s been such a gratifying life to be serving with you,” Gordon said. “It just brings my heart a lot of cheer to be able to look out into the audience and see so many people that have had great influence on me, so thank you.”

Gordon added he wants to see AEDC at the forefront of advancing Air Force technology and serve as the pacesetter for the Air Force Test Center enterprise and the branch as a whole.

“This is just an honor,” Gordon said. “It is so exciting to be here with this team to get a chance to lead.”

As AEDC commander, Gordon leads an advanced complex of flight simulation test facilities. AEDC is one of three installations that are part of the Air Force Test Center, which is one of six subordinate commands of the Air Force Materiel Command organization.

Geraghty, who had served as AEDC commander since June 2019, is set to be promoted to brigadier general and take command of the 96th Test Wing at Eglin AFB.