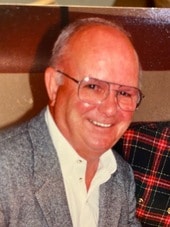 TULLAHOMA – Mr. Guy J. “Bud” Gardner, age 93 of Tullahoma, Tennessee, passed away on August 13, 2020 at Tennova- Healthcare Harton Hospital after a brief illness.
Guy was born in Kingsville, a town in Essex County in southwestern Ontario, Canada and moved to Champaign-Urbana, Illinois as a child. Guy was a veteran of the United States Army having and served in World War II. He was a Sergeant in Company C, 1st Battalion, 35th Regimental Combat Team, 25th Infantry Division. After returning from the War, he married Nancy Sue Freeman on October 27, 1946 and they moved to Tullahoma with their son, Les. He worked as a Mechanical Engineer at Arnold Engineering Development Complex (AEDC), headquartered at Arnold Air Force Base, where he worked until he retired.

Guy was a devoted husband, father, grandpa, and great grandpa. He loved his family and always had a camera in his hands documenting every memory. He shared a love of Golf with his wife and son as they were members of Lakewood Country Club for many years. Guy and his wife Sue were long time members od Trinity Lutheran Church.
After he retired Guy and Sue became snowbirds and spent winters in Ft. Myers, Florida and Sanibel Island. He loved to use his hands and enjoyed wood working and stone cutting. He built several working clocking and jewelry pieces. With his engineering background he enjoyed taking things apart and rebuilding them. His hobbies also include working with HO Gauge Model Trains. He had a great love of American History. He also had a special love for his cats, Callie and Marvin, who were always by his side.