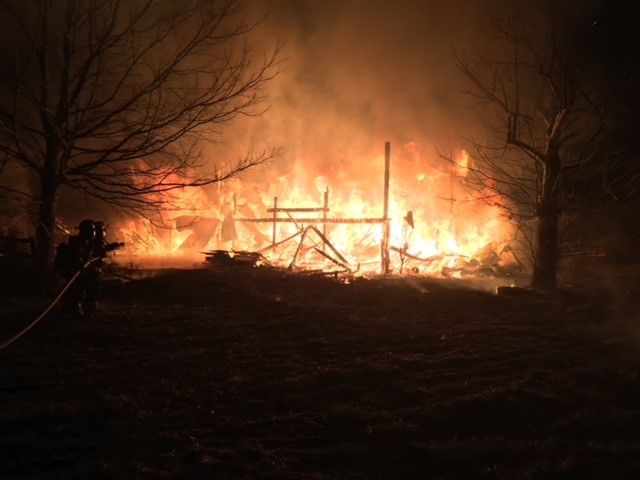 Manchester Fire-Rescue responded to a structural fire Tuesday night around 6:04 PM. Crews arrived on scene within minutes and were presented with a fully involved Pole Barn/House fire. The structures were located about 200 yards of off Interstate Dr. in a wooded area.

Crews began an initial attack with deck gun and handlines from the first arriving engine company. That initial engine was replaced with the 2nd arriving engine.

A Mutual Aid tanker from Summitville Volunteer Fire department arrived on scene and reserviced Engine 1 with water until a water supply could be established. Once the engine refiled their water tank, they deployed about 800 feet of 4-inch large diameter hose into the engine on scene. Once a water supply was established crews deployed a 2.5” master stream and a 2.5” monitor nozzle along with 1 ¾” attack lines to combat the fire.

Crews were able to get the fire under control and then started conducting salvage and overhaul operations on the incident.

The facilities involved in the incident were a pole barn and house that had been on the property for some years.

Manchester Fire Chief George Chambers said all crews did a great job in extinguishing this fire. Coffee County EMS and 911 center did a great job along with Summitville Volunteer Fire department and Manchester Police.