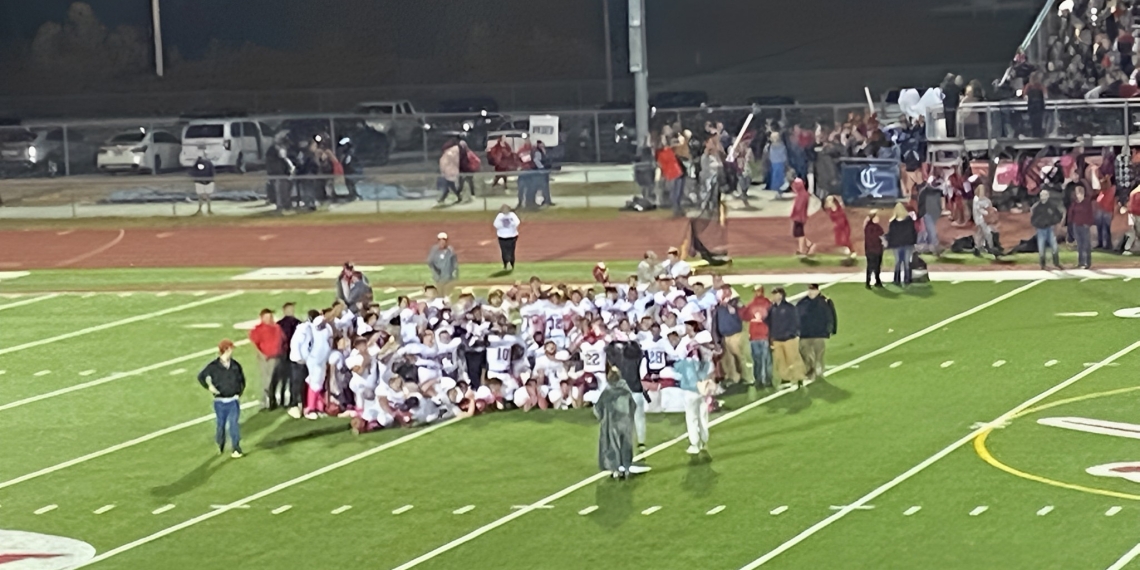 The Coffee Red Raiders traveled to Cookeville to do something they had not done since 2010, win a title. Coffee County won the District 6 3-A championship that season by defeating Cookeville 12-7 in regular season finally. The 2022 version of the Red Raiders are your Region 3 6-A champions after defeating the Cavaliers 26-7 on Friday night. The first ever region title in school history.

Cookeville gave Coffee County all they could handle as the Raiders led by 3-0 score at the end of the first half. Manny Gonzales kicked 30-yard field-goal with 2:43 remaining in the 1 quarter for the only score.

After receiving second-half kickoff Coffee County zipped down the field, led by Konor Heaton’s 2 big runs as he finished off the quick :46 drive on a 43-yard run to up the lead to 10-0.

The Raiders would score again with 6:50 to go in the 3rd as Cole Pippenger rushed into the end zone on an 11-yard run to make it 17-0.

Cookeville answered back with their only touchdown of the game on Blake Owen 1-yard run with 1:53 left in the 3rd quarter.

After stopping Coffee County from scoring the Cavaliers had the ball on their own 2-yard line and the Raider defense brought the heat. LB Jayden Carter blasted Cookeville Quarterback Mace Thomsen in the end zone for a safety to give Coffee County a 19-7 lead with 6:04 to go in the game.

The Raiders finished off the scoring when Pippenger danced his way through the Cav defense on a 35-yard run with 2:24 left to make the final 26-7.

The game was marred by penalties with 29 flags with 27 accepted. Two Cookeville coaches were ejected from the game. The Cavaliers received 3 unsportsman like penalties on one play after what they thought was a Coffee County fumble. This resulted in a 45-yard mark off and the ejection of the head coach. The next time it was 2 unsportsman like penalties resulting in a 30-yard penalty and an assistant coach being tossed.

The Red Raider defense was outstanding as they held Cookeville to only 188 yards of offense. Tyler Martin and Caiden Warren had interceptions, plus Tyler Smith had a blocked a field-goal.

Because this was Coffee County first region championship, the entire Coffee County team and coaches were name the Rooster 101.5 players of the game.

Vols Light Up the Scoreboard and Cigars in Win over Alabama