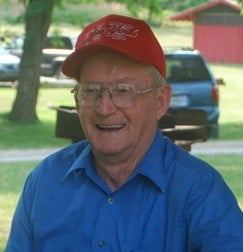 Funeral services for Mr. JW Ferrell, age 93, of Manchester, will be conducted at 2:00 PM on Sunday, January 24, 2021, at Manchester Funeral Home.  Burial will follow in Gnat Hill Cemetery.  The family will receive friends from 12:00 PM until the time of service at the funeral home.  Mr. Ferrell passed from this life on Thursday, January 21, 2021, at NHC in Tullahoma, TN.

JW was born on September 20, 1927, the son of the late Joseph and Gracie Ferrell.  He served in the United States Army during World War II and the Korean War.  After his military career, JW worked as a Tanner for Shelbyville Tannery.  He loved to fish and shoot pool, but watching his grandchildren play ball was his favorite past time.  He was a loving husband, father, brother, and grandfather.

In addition to his parents, JW is also preceded in death by his beloved wife, Modean Ferrell; one brother, Leland Ferrell; one sister, Alberta Farless.  He is survived by his three sons, James Ferrell (Cindy), David Ferrell (Susan), and Larry Ferrell (Maurina); one daughter, Kathy McWhorter (Barry); eleven grandchildren and seventeen great-grandchildren.

Manchester Funeral Home is honored to serve the Ferrell family.