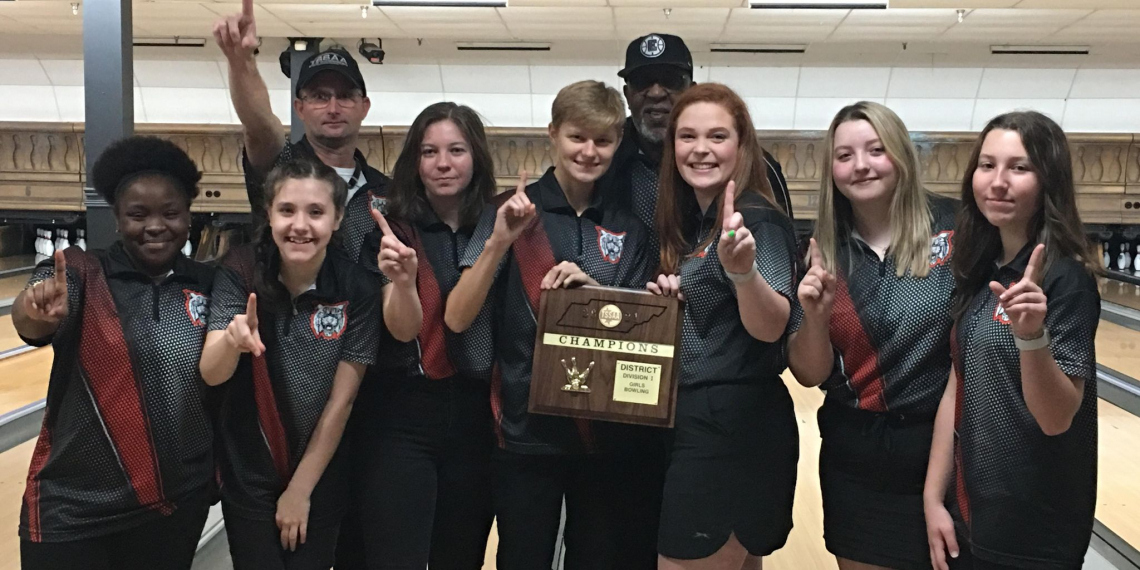 For the second time in program history, the Tullahoma High School girls bowling team captured the District Title after a 20-3 win over Lawrence County this past Monday.

“I’m excited for these ladies,” said THS Head Coach Lamont Snipes. “What I’m more excited about is the fact that they are a young team. Only two of these girls are seniors. This team went to state last year, and I think we have a good opportunity to be heading back. It’s been a special and exciting year.”

Tullahoma opened play by splitting the six individual matches with Lawrence County in the American 10-pin game. Once bowling concluded in that opening competition, Tullahoma received two additional points for leading the game in total pins, 897-881, to take a 5-3 advantage.

In the opening game, Christina Petty, Rachael Mitchell and Lynsey Jackson all notched wins for Tullahoma. Petty defeated her opponent, 135-126, while Mitchell followed with a 167-151 victory and Jackson closed out the first set with a 214-152 win.

Following the opening competitions, the remainder of the match was conducted in a baker games format, where teams consisted of five bowlers, with each individual bowling two frames. Tullahoma swept the baker game format, receiving two points for each of the five games played.

In the opening baker game, Tullahoma notched a 198-141 victory to open up a 7-3 match lead. Madelyn Hamilton, Emilee Hewitt, Petty, Mitchell and Jackson teamed to record the win for THS.

Tullahoma dominated the second baker game and picked up a 165-113 win. Hamilton, Hewitt, Petty, Mitchell and Jackson once again teamed to help give THS a 9-3 match advantage.

The third game was tighter, but Tullahoma defeated Lawrence County 208-188, to increase its lead to 11-3. This time, Haylei Bryne teamed with Hamilton, Hewitt, Mitchell and Jackson to record the win.

Game four saw Tullahoma control the contest on its way to picking up a 204-167 victory. Hamilton, Zamahria Simmons, Hewitt, Mitchell and Jackson secured the win and put THS up 13-3.

The final game saw Tullahoma pick up a 113-96 victory. Petty, Bryne, Simmons, Hamilton and Jackson recorded the win to make the match score 15-3.

“Our bowlers continue to showcase why Tullahoma is considered to be one of the premier bowling programs in the state,” said TCS Director of Schools, Dr. Catherine Stephens. “These five bowlers have an incredible opportunity in front of them as they get to compete at the state’s highest level. I’m beyond proud of the talent that each bowler displays, and I also want to congratulate our Lady Wildcats for winning the district title. What an exciting time it is for Tullahoma athletics.”

Tullahoma also had five individuals qualify for the TSSAA Individual State Tournament as a bowling program. In November, the THS boys and girls team participated in sectional qualifiers at Hendersonville Strike and Spare.  Each individual bowled six games, and the top 20 scorers on each side advanced to the state tournament.

Jackson combined for a score of 1,154 during her six matches, the fourth-highest total out of all state qualifiers. Hewitt added a score of 1,007, while Mitchell qualified at 959 and Petty earned her spot at 939. On the boy’s side, Austin Carr qualified for state with a score of 1,063.

The TSSAA Individual State Tournament will take place at the Smyrna Bowling Center on Jan. 19. Those wanting to purchase advanced tickets will be able to do so beginning in January here.