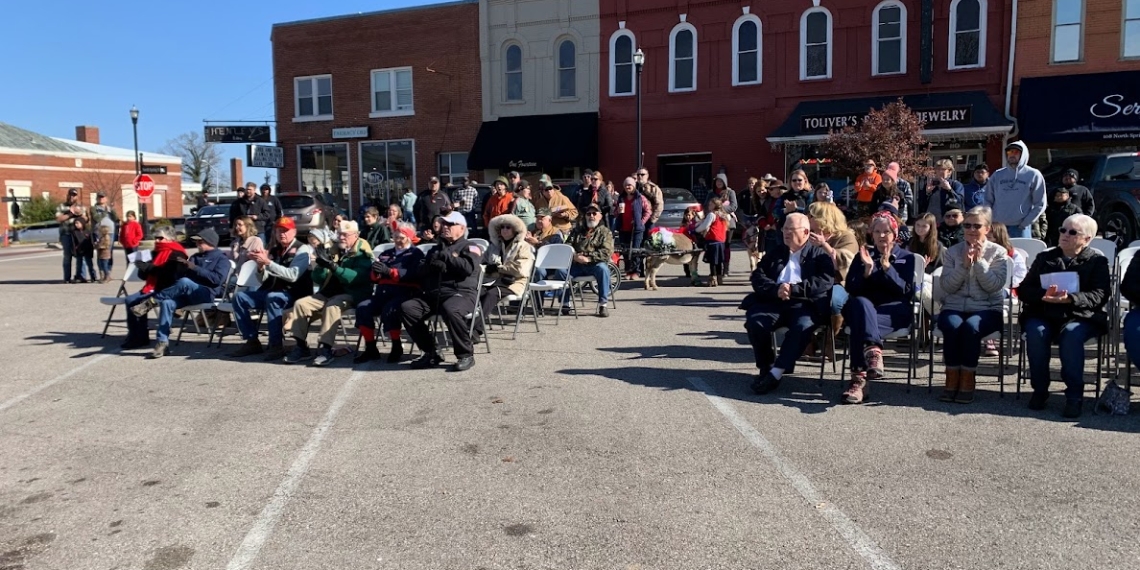 The Fourth Annual Manchester Veterans Day Parade and Ceremony was held on Saturday, November 19th, after being rescheduled due to extreme weather.

The parade was compiled of over 50 entries, containing about 100 participants.

Ricky Davis, dressed as a World War I soldier, led the parade followed by military vehicles from the Sam Werner Museum.  Riding in the front Jeep, were several VFW Post and Auxiliary members dressed as famous World War II officers.

In and around the vehicles, were several VFW Post and Auxiliary members dressed as Rosie the Riveter. They handed out candy, dog treats and Buddy Poppies to those along the parade route.

Following the parade, a ceremony was conducted by Jim Dobson, VFW Post 10904 member and Assistant Principal at Westwood Middle School.  Dobson, a retired and disabled Army Armor Major, lead a host of special guest speakers and presenters. Dobson noted how citizens can be good Americans.

“So, how do Americans properly thank their veterans?  It can be as simple as thanking a veteran for their service, but that’s just the beginning. Americans can thank its veterans by living their lives and enjoying America’s greatness.

Americans can thank veterans by taking full advantage of all your rights that they defended. Vote in every election; volunteer your time for a worthy cause; fulfill your jury duty; be a volunteer at a school; mentor a child; represent your country well while abroad; ensure you are registered for Selective Service.  Live your lives and be good Americans, then all veterans will be proud to know that their sacrifices were not in vain.”

All the veterans who received quilts devoted hundreds of hours towards volunteer work in our community.

Manchester Rehab provided free pies to all veterans and their families.  And Brandon Tax and Bookkeeping placed photos of local veterans in their window as they do each year around Veterans Day.

Bob Brinkmann, VFW Post 10904 Chaplain, closed the ceremonies which honored all veterans and their families, Gold Star families and honored the service of animals used in military service.

The parade and ceremony were organized by the Coffee County Veterans Association, which is comprised of the American Legion Post 78, Disabled American Veterans Chapter 90 and VFW Post 10904 and their Auxiliaries.

For more on this and other veterans’ events in our community, go to Veterans of Foreign Wars, VFW Post 10904 for information.