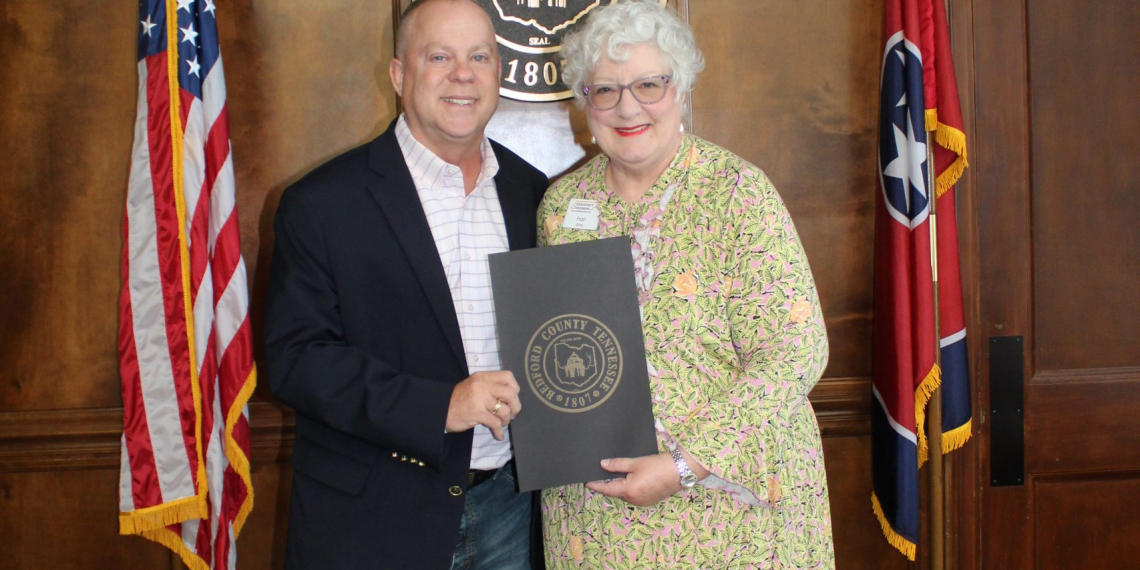 Just as an Amber Alert can help return a missing or abducted child, a Silver Alert can call the community’s attention to a missing dementia patient, who may have wandered away from home or a care facility and who may be in need of assistance.

Tennessee’s Silver Alert law took effect last July, and has already helped to protect some of the state’s most vulnerable and at-risk adults.

Bedford County Mayor Chad Graham signed a proclamation recognizing Silver Alert Awareness Month during May. A copy of the proclamation was given to Fran Gray of Alzheimer’s Tennessee, which has a regional office in Tullahoma.

The Silver Alert Law took effect July 1, 2021, and both of Bedford County’s state legislators – House Speaker Pro Tem Pat Marsh and State Sen. Shane Reeves – were among its many cosponsors. The law passed unanimously in both houses of the General Assembly, and money was put into the state budget to fund it. The law is already helping to find missing individuals who have wandered due to dementia, physical impairment, or disability. The TBI is tasked with oversight and creating a uniform statewide protocol for missing persons, including public alerts through media and on interstates, as well as posts on social media and coordination with local law enforcement.

According to Alzheimer’s Tennessee, six out of 10 people with Alzheimer’s disease will wander at some time during their illness. Alzheimer’s Tennessee has created a guide for families of Alzheimer’s and other dementia patients, which they can fill out with a description of their loved one. The form includes information about what to do in case of a wandering incident. It can be downloaded from https://www.alztennessee.org/help/community-programs/silver-alert.

For more information about Alzheimer’s Tennessee, go to https://www.alztennessee.org/.