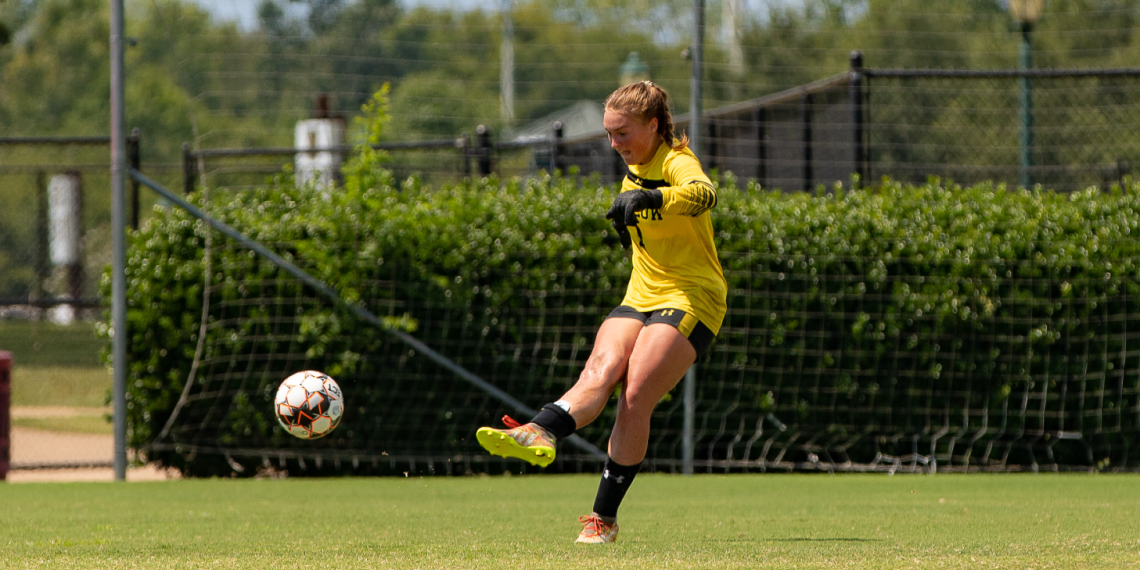 The No. 20 Motlow Bucks closed out the first week of the 2022 women’s soccer season with a narrow 1-0 loss to No. 17 Indian Hills Community College (IA) last Sunday at Oakland High School in Murfreesboro.

The Bucks (1-2) were fresh off a 1-0 win over Wabash Valley College (IL) last Friday in Murfreesboro. Motlow opened the season with a 6-4 loss to Polk State College (FL) on Tuesday in Cochran, Georgia.

“I thought we more than matched Indian Hills in competing, intensity, and the mentality it takes to win,” said Bucks Head Coach Andy Lyon. “We just couldn’t finish our chances when we got them. Indian Hills is a powerful opponent and playing them was an excellent test for us.

“We are still building our confidence and teamwork every game,” Lyon added. “We are playing different ways tactically and analyzing different formations and threats. We’ve had to play in multiple ways and against various formations, and it will help us as the season progresses.”

Motlow will go back on the road for the next three games. The Bucks travel to Atlanta on Sept. 3 to face Oxford College of Emory University, then go to Milledgeville to face Georgia Military College on Sunday, Sept. 4. TCCAA/Region VII play opens Thursday, Sept. 8, with a trip to Memphis to face Southwest Tennessee Community College.

“We use our first few non-conference games to get our squad comfortable with how we want to play. We look for intensity and try different people in different spots,” continued Lyon. “We always look forward to the conference schedule. The trip to Memphis is challenging, and we are ready to get into conference play.”

The next home game is Monday, Sept. 12, when the Bucks host Itawamba Community College (MS) at 4 p.m. at Franklin County High School in Winchester.

Motlow is building a home soccer field on the Moore County campus. It will open at the start of the 2023 season.

Motlow pushed Indian Hills (3-1) to the limit on Sunday, with the two teams battling to a 0-0 tie at halftime. In the 75th minute, the Warriors’ Dare Kroeten nudged in a goal for the only goal of the match. Motlow goalkeeper Lucy Riddle had five saves on the afternoon, while Motlow’s offense managed three shots on goal and nine shots overall.

Freshman Alysa Benton scored the game-winning goal at the 63:50 mark to lead the Bucks past Wabash Valley (0-2) Friday. Riddle was again exceptional, playing the full 90 minutes at goalkeeper with three saves for her first shutout of the season. Motlow had 13 shots to Wabash’s 10, and the Bucks earned five corner kicks.

Sophomore Kristen Gasaway scored two goals and Alexis McMath and Benton one each in Motlow’s season-opening loss to Polk State College. McMath got Motlow on the scoreboard with a header off a corner kick from Madisen Hodges. Then Gasaway, Motlow’s leading scorer from last season, made a terrific move on the Polk goalkeeper to tie the score at 2-2.

Motlow fell behind 4-2 early in the second half before Gasaway again powered a shot into the goal at the 65:01 mark to pull the Bucks within 4-3. However, that was as close as Motlow would get, as Polk State scored two more goals. Motlow’s final goal came on a Benton free kick in the 83rd minute.

Manchester freshman goalkeeper Lucy Riddle, shown in the photo against Indian Hills, has allowed only one goal in the previous two games, including a shutout over Wabash Valley College. Riddle is tied for third in the nation with 22 saves. Photo provided by Motlow