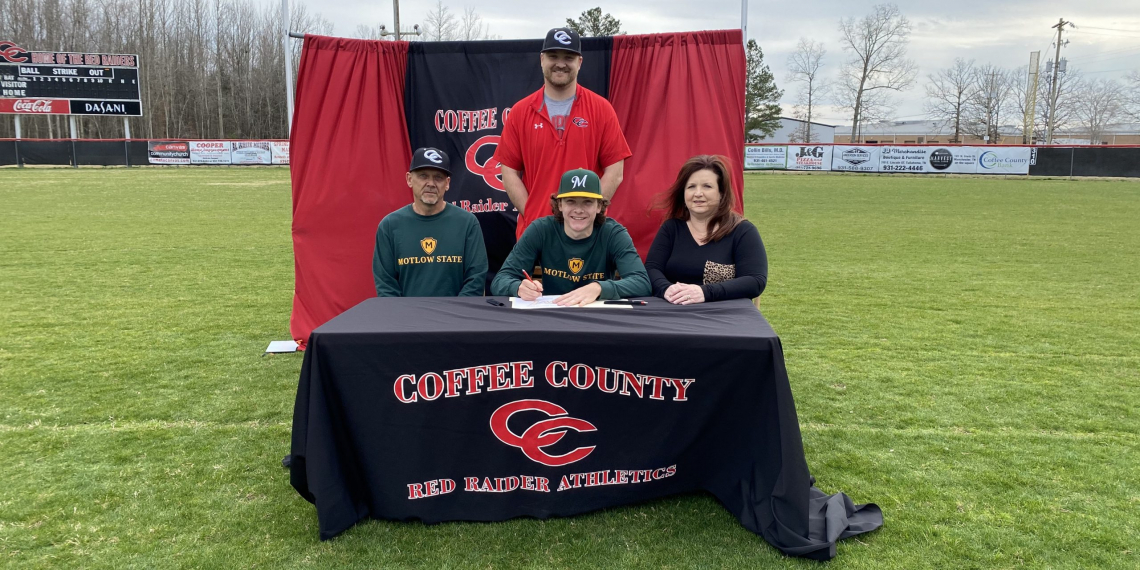 The Motlow Bucks signed a baseball letter of intent Thursday with Coffee County Red Raider Pitcher Griffin Meeker to continue his education and compete at the next level in Division I NJCAA Baseball next season.

Player motivation and having the ability to continue his baseball career at the collegiate level is what attracted Meeker to Motlow.

“I am very excited to attend Motlow State,” he said. “I really love the players’ motivation on the team.”

“We talked about the environment on campus at Motlow State, and it felt like home,” he said.

Coffee County Head Coach David Martin said Griffin is one of the most competitive players he has ever had the pleasure of coaching.

“Griffin stepped up to play at the varsity level at a very young age in his high school career,” he said. “Griffin has been a staple in the Red Raiders baseball program for four years and says it will be very hard to watch him go.”

According to Martin, Meeker is set to follow his brother into the Motlow Bucks’ Baseball Program. He noted that Peyton Meeker played first base for the Bucks and his prep ball for the Coffee County Red Raiders also.

With the younger Meeker’s exit to Motlow, Martin said, “I will miss him at the bump come next season.”

He said, “The coaches Head Coach Dan McShea and Assistant Coach John Reese Gilmer as well as the Motlow State Baseball Club have been very hospitable towards Griffin and his family.”

Meeker noted he appreciates the updates from coaches on how they plan to utilize him on the field. He says most of the Meeker family are alumni of Motlow State and are thrilled he is close enough to come and watch him play.

Meeker plans on majoring in nursing while attending Motlow State and hopes to attend nursing school after playing ball at the collegiate level.