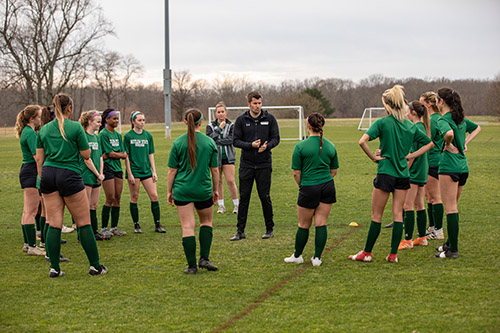 Since its inception in 2017, the Motlow women’s soccer program has enjoyed great success. The first five years of soccer at Motlow were capped by the incredible 2021 season. Motlow not only won the regular season and Tennessee Community College Athletic Association (TCCAA) conference tournament but also won the district playoff and advanced to the National Junior College Athletic Association (NJCAA) national championship tournament.

In addition to the team’s success, Head Coach Andy Lyon was named the NJCAA Region VII Coach of the Year in 2021 by the TCCAA.

“Undoubtedly, our biggest achievement so far is reaching the national tournament this year. This is only our fifth year in existence as a program, so to be mentioned in the same sentence as some of the programs that are permanent fixtures at that level is hugely satisfying,” said Lyon.

This year, the team ranked as high as number 11 in the United Soccer Coaches poll national rankings.

“We hope to top that next year!” exclaimed Lyon. “Reaching the national tournament this year gave us an excellent idea of the level to strive for in the future.”

Motlow student and women’s soccer player Janai Hosley said, “When I think of Andy as a coach, I think of him as one the most caring and understanding people. He is always going to let you know when you can do better. He cares about our physical and mental health. He always wants us to push to be the best we can be. He is the reason I pushed myself more this season. Overall, he is like a second dad to me. I couldn’t be more thankful for him to be my coach.”

Coaches are responsible for ensuring each player receives the training and skills needed to win games. Winning is exactly what Andy Lyon teaches Motlow’s women’s soccer team. As a leader, teacher, and administrator, Lyon continues to stride forward.

“My main motivation is to help my players reach their potential, both on and off the field. Winning is a bonus, but I thrive on seeing my players achieve something that they previously thought was impossible, or to see the group come together to thrive in moments that thoroughly test them,” he added.

Lyon said he is always eager to learn and is a consistent student of the game.

“Soccer has been a huge part of my life, and I want to be the best coach and person I can be for my players and those around me,” he said. “I am delighted that Motlow soccer is on the map on a larger scale after the success of the players this year.”

Motlow student and women’s soccer player Rudy Fisher said, “Coach Lyon allowed me to continue the sport I love. He pushed me and guided me. He also gave me comfort when I needed it. He always knew what to say and how to say it. My love for the sport has tripled playing here. I will forever be grateful for the time I have spent at Motlow because of the coaches and my teammates.”

Lyon describes his coaching style as a little relentless, but he’s not much of a shouter. A sign on his office door reads “Never Settle,” which he said serves as a reminder to himself and his players.

“I want my players to always strive for success and not just accept the level they are at, whether that be on the field, in the classroom, or their personal goals. We do celebrate our successes, but we are undoubtedly aiming for more as a group,” he added.

Training sessions focus on decision-making. Players must make choices rather than the coaches making decisions for them.

“We want our team to be comfortable on the ball and not be afraid that they may fail or make mistakes. Mistakes are part of the game, and we encourage them to make mistakes in training sessions because to us, this means that they are taking risks,” explained Lyon. “Hopefully, we have prepared our players during the training sessions so that during games, we are just making small adjustments and encouraging players.”

His players know they can count on him and the coaching staff off the field. Lyon said, “We are there for them, and we are here when they need us. I am always eager to continue to grow in terms of soccer knowledge, but if my players are successful and happy, then that’s success to me!”

Along with Assistant Coach Katie Reid and Goalkeeper Coach Dylan Spencer, Lyon wants to continue to reach the national tournament each year and attract top players and students to Motlow.

“The players deserve every award that they received this year for their hard work and perseverance in extremely uncertain times. My aim each year is to ensure that my players have what they need and know that they have a coaching staff who support them,” concluded Lyon. “I was delighted to be given the opportunity to start the first women’s NJCAA soccer program in Tennessee and will always be grateful to Motlow for the chance to build a team the College is proud of.”