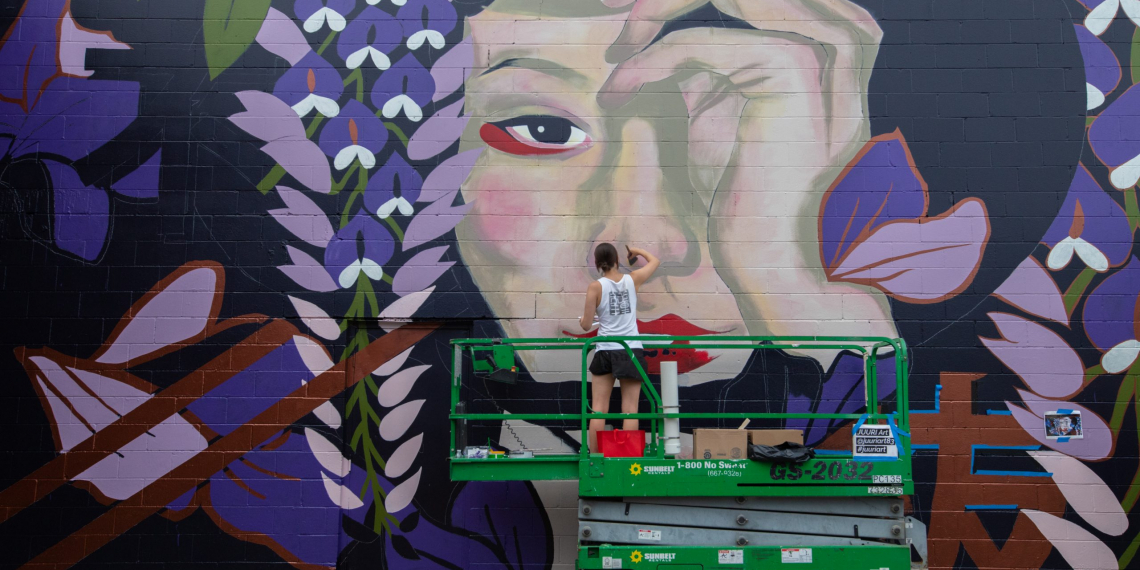 This past weekend, DMA-events’ celebration of the upcoming 19th Amendment centennial, Walls for Women, kicked off with murals in downtown McMinnville and Tullahoma. This month-long, state-wide art initiative will knit together larger cities like Knoxville and Nashville with smaller towns such as Nolensville and Maryville in one giant creative placemaking project spearheaded by Tullahoma residents Kristin Luna and Scott van Velsor.

The Tullahoma mural, “Wisteria Maiden,” painted by Japanese artist Juuri on the back of Memories Antiques was sponsored by Cycles Gladiator Wine and Sunbelt Rentals and will be completed on Friday.

With 2020 marking the centennial of the 19th Amendment to the U.S. Constitution giving women the right to vote, DMA-events kicks off the creation of 10 original murals this summer by female artists in multiple communities across Tennessee, the last of the necessary 36 states to secure ratification on Aug. 18, 1920.

Kristin Luna and Scott van Velsor started 501(c)(3) DMA-events in May 2018 as a way to harness and inspire the imaginative spirit found in all of humanity by removing some of the barriers to entry of the creative process. Walls for Women, their project for 2020, focuses exclusively on capturing female creative energy for artistic placemaking in communities in need of joy, hope and color during Tennessee’s Centennial of the 19th Amendment.

The work will be painted on walls in high-visibility locations with the subject matter reflecting the individual artists’ professional talents.

“DMA believes in giving artists full creative expression, so the murals themselves will not necessarily be about the suffrage movement, but what lives in each muralist’s creative mind,” Luna says. “They will be colorful, thoughtful and drive forward the state’s century-old commitment to female equality. The whole concept of this festival is to give women an unregulated voice through art.”

In addition to the creation of new art, DMA hopes to drive awareness to the importance in voting, both in 2020 local and federal elections, through the presence of these mural installations in a pivotal election year.

“Voter participation in Tennessee is nowhere near the levels it needs to be for a functioning democracy,” Luna says. “While the murals honor the ratification of the 19th amendment and are integral in the beautification of downtown areas, we also want to see this project lead to an increase in our state’s voter turnout, both this election season but every year going forward.”