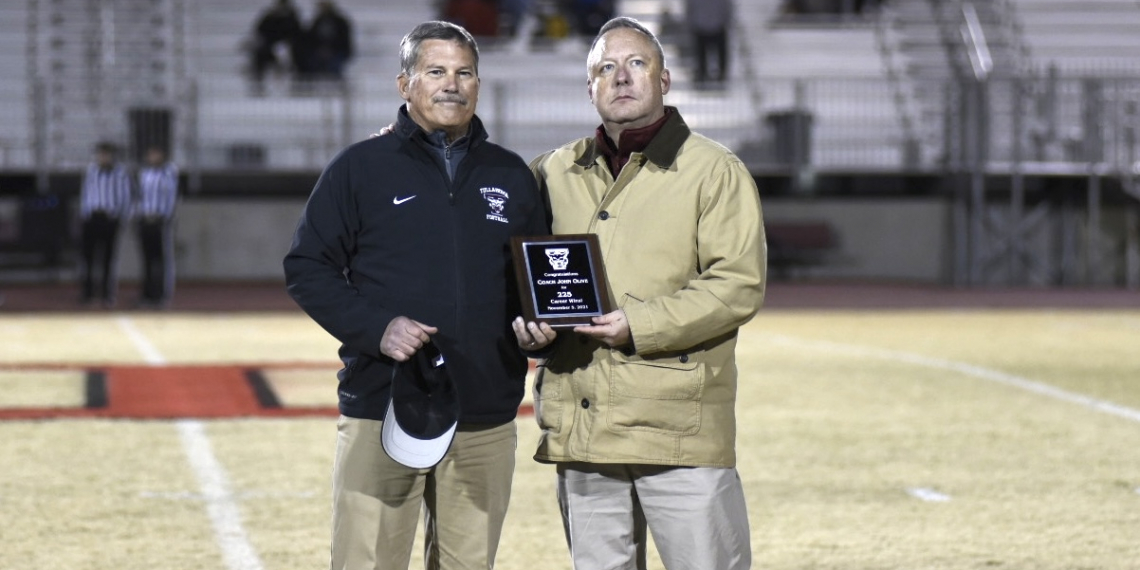 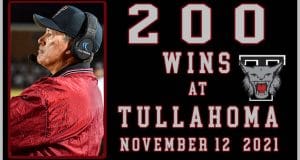 Friday night’s 42-7 win over Montgomery Central on the gridiron was historic for John Olive as the Tullahoma Head Coach amassed 200 victories at the helm of the Wildcats.

Olive is now in his 29th season at Tullahoma and just a week earlier had accomplished another career milestone. The Wildcats opened this year’s postseason run with a 49-12 victory over Chester County, which allowed Olive to record his 225th career win.

“I’m very fortunate,” Olive said following Friday night’s second-round playoff victory. “There have been a ton of players come through here and they are the ones who win games; coaches lose them. I really mean that.”

Twenty four of Olive’s victories have come in the last two seasons. Currently, the Wildcats have a 12-0 record as they get set to host Pearl-Cohn in the quarterfinals this coming Friday. This historic season follows a 2020 campaign where Tullahoma went 12-1, losing only to Nolensville in the third round of the playoffs.

“These last two years have been fun,” Olive said. “These players and coaches make life fun, whether that’s in the locker room or out on the practice field. They’re just a fun bunch and a talented bunch to be around and that gives you a chance to win every ball game that you line up in. Hopefully, we can go and make our dreams a reality. That’s our goal.”

This coming Friday will mark the third time in the last four years that Tullahoma has advanced to the quarterfinals of the postseason. While the Wildcats have had success over the last few years, things haven’t always been easy for Olive and his coaching staff, most notably during the 2015 and 2016 seasons that saw Tullahoma go winless in back-to-back campaigns.

“I’m very fortunate that I was able to survive an 0-20 streak and reap the benefits of some very good football teams here over the last five years,” Olive said. “When you’re in a streak like that, molehills become mountains. It really makes you question everything that you do as a coach.”

While it was frustrating at the time, in reflection, Olive said that time period taught him a lot on and off the field. Included on that list of learning lessons was how to appreciate and savor each and every victory.

Tullahoma’s 2016 season ended with a loss at Giles County, a contest where the Wildcats competed until the very end. That heart and determination are what Olive remembers about that squad. In the 2017 opener, Tullahoma ended its winless streak with a 38-29 victory at Shelbyville.

“I told that 2016 team that I would never forget them. There at Giles County, we were 0-19, and those guys fought like crazy to win their first game and to avoid another 0-10 season,” Olive said. “Those two years taught me that you’re going to persevere through life and that there are things that are more important than football games. It’s hard to realize that though when you spend so much time and put so much effort into the sport as a player and as a coach.”

“Congratulations to Coach Olive on this amazing accomplishment,” Dr. Stephens said. “The positive impact that Coach Olive has made on his former and current players is quite evident. He continues to be a pillar in this Tullahoma community, and it has been an absolute joy to watch the Wildcats compete every week for the last two seasons.”

Tullahoma will host Pearl-Cohn for the second time this season this coming Friday night. During the first matchup on Sept. 24, Tullahoma jumped out to a 21-0 lead and was able to hang on for the 24-21 victory. Heading into the quarterfinal contest, Olive said he expects this Friday to be another close contest.

Kickoff for this Friday’s game is scheduled for 7 p.m. Tickets will be sold at the box office for $10. Fans may also pre-purchase their tickets online at GoFan.co.

You can also hear the game on your radio home of Wildcat sports 93.9 The Duck.