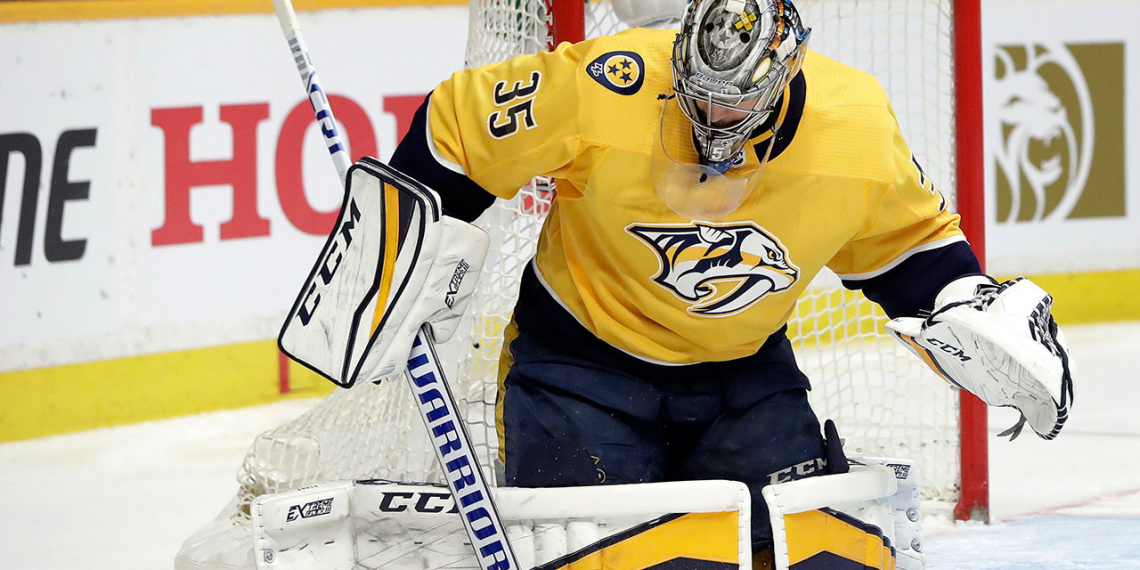 The Nashville Predators Announced Wednesday that they will retire the number of former goaltender Pekka Rinne on February 24th prior to the Preds game with the Stars. Rinne will become the first player in franchise history to have his number retired.

“Pekka Rinne defines what it means to be part of the Nashville Predators,” Henry said. “From how he trained and played; to how he put so much into so many community-changing programs, from Best Buddies to the 365 Fund to Feeding the Frontlines; to always being there when SMASHVILLE needed a friend, Pekka was always there, doing more than anyone thought a person could. While he is the greatest player to wear our jersey, he was even better as a neighbor and friend to all. His career on and off the ice will take center stage when we raise his sweater to the Bridgestone Arena rafters, but we know that he will be celebrated time and time again, as his impact can’t be contained to just one event.”

“As the face of the Predators for more than 15 years, it is only right that the first number to be retired in franchise history is Pekka Rinne’s,” Poile said. “He is one of, if not the, primary reasons our franchise has grown into what it is today. It’s going to be an incredibly special night not only for Pekka, his family and friends, but for our entire organization. Our congratulations go out to Pekka, his fiancée Erika, son Paulus and the entire Rinne family on this well-deserved honor. We can’t wait to see No. 35 go up into the Bridgestone Arena rafters and share the moment with our fans on Feb. 24.”

Rinne, who turned 39 wednesday, is the franchise’s leader in nearly every goaltending category, including games played, wins (369), goals-against average (2.43), total TOI (39,413:29), shutouts (60) and saves (17,627). He also is 19th in shutouts and tied for 19th in victories in NHL history. In addition to his Predators records, the Kempele, Finland, native also owns the most games played, wins and shutouts by a Finnish-born goaltender in League history.

“After playing my first game with the Nashville Predators in 2005, I could have never dreamed that my jersey would be retired 16 years later,” Rinne said. “It’s the ultimate recognition for an individual player. I’m very grateful for the Predators organization and the City of Nashville. I cannot wait to celebrate that moment with my family, friends, teammates, coaches, staff and the fans at Bridgestone Arena.”

During his decorated 15-year NHL career, Rinne won the 2018 Vezina Trophy as the NHL’s top goaltender and was a finalist three other times (2011, 2012 and 2015); was a four-time NHL All-Star (2015, 2016, 2018 and 2020); and was twice voted to the NHL’s year-end All-Star Teams, including a First Team nod in 2017-18. Rinne’s career goals-against average of 2.43 is tied for the fourth-best mark among goaltenders with at least 350 wins in NHL history, trailing only Dominik Hasek, Martin Brodeur and Jacques Plante. Additionally, Rinne is one of 12 goaltenders in the League’s record books to record at least 350 wins and 60 shutouts, with eight members of that group enshrined in the Hockey Hall of Fame; the other four, including Rinne, are either currently active (Marc-Andre Fleury) or are recently retired (Henrik Lundqvist and Roberto Luongo).