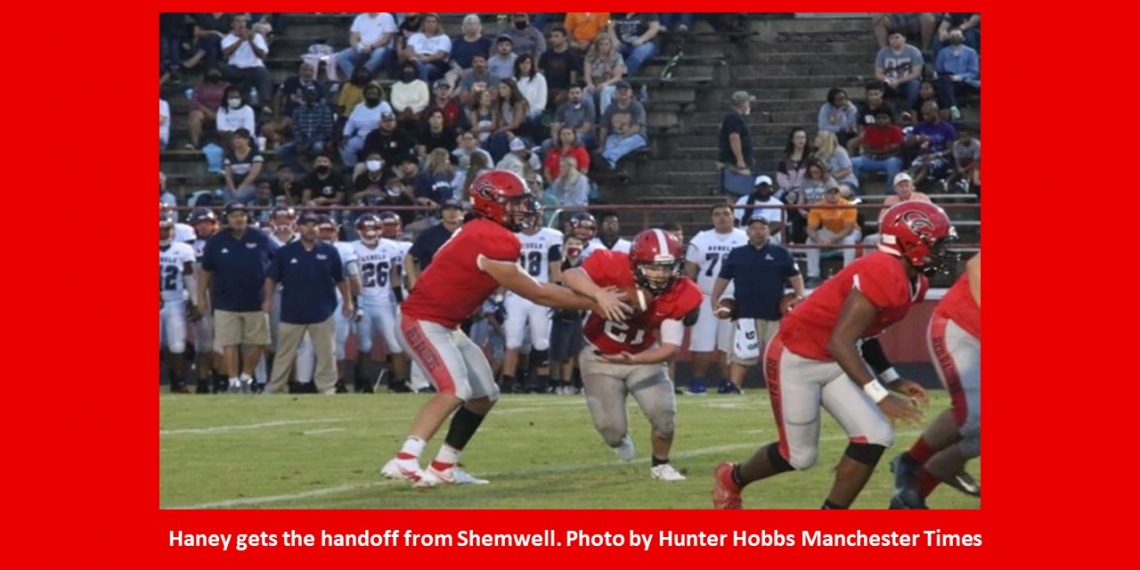 Raiders Knock Out the ‘Lights’ on the Rebels

The Raiders Open the season with an impressive 21-19 win over the Rebels.

Coffee County attacked Franklin County on the ground and the air. The Raiders carried the ball to 172 yards and added another 118 through the air for a total of 290 yards. The biggest stat for the offense was time of possession as Coffee County held the ball for 29:22 and held the Rebels to 18:22.

Raider QB Connor Shemwell who passed for 118 yards and another 63 yards rushing got Coffee County on the board first with 4-yard run.

Not to be outdone the Raiders answered back with a 51-yard TD pass from Shemwell to Kelvin Verge.

The first half scoring was not over as the Rebels hit on another long TD pass with Johnson hitting Na’Zaiyah Holman from 52 yards, but the 2-point conversion was no good.

RB Marshall Haney, who led the Raiders with 104 yards got in the endzone late in the first half with a 16-yard run, with extra point making it 21-13 at halftime.

During the third quarter there was a power outage and the field went dark for around 40 minutes. When the lights did come back on the Raiders were ready as the held the Franklin County offense out of the endzone. The Rebels did find paydirt when Anthony Seno picked off a pass and scored the final points of the game as the failed to gain the 2-point conversion.

LB Jalen Williams was outstanding on defense as he earned the Crazy Daises Player of the Game. Williams contributed double-digit tackles on the night.

Coffee County will travel just down Hwy 55 to Tullahoma as they take on the Wildcats in the 95th Annual Coffee Pot game with both teams at 1-0.

Moore County Shuts Out Cascade to Kickoff the Season