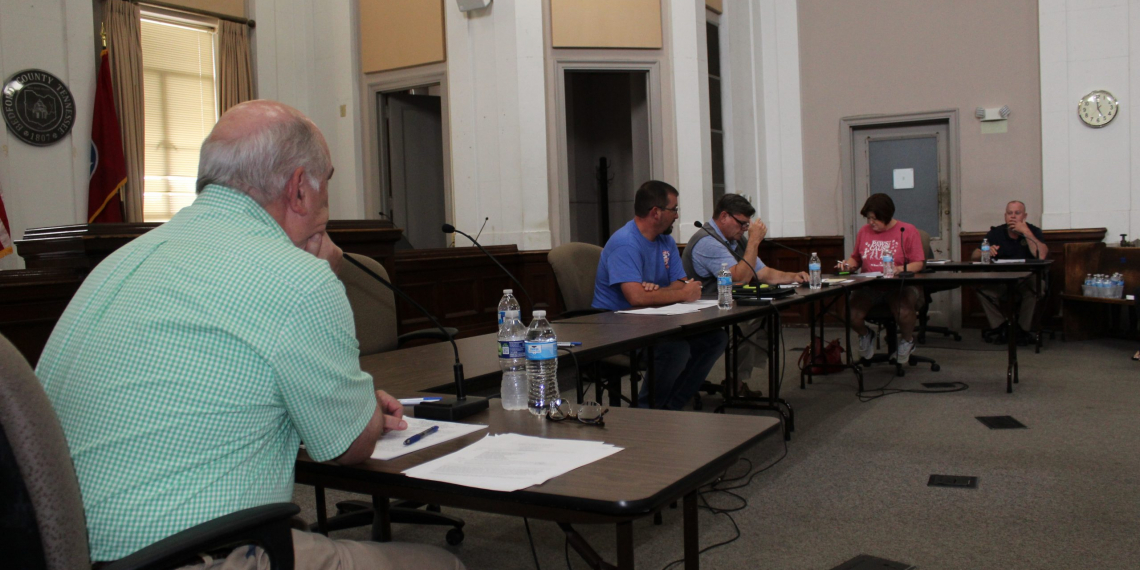 Bedford County Board of Commissioners and its standing committees will have new temporary meeting places beginning in June, as Bedford County Courthouse prepares for a renovation project.

The renovation project, bids for which will be opened in June, will make the second-floor circuit courtroom more functional and accessible while preserving its stately, historic appearance. In addition, the county’s planning and zoning offices will move from Dover Street to the third floor of the courthouse, placing them closer to property-related offices in Bedford County Courthouse Annex. Public restrooms in the courthouse basement will receive a much-needed renovation, bringing them up to modern standards and making them compliant with the Americans With Disabilities Act.

The courthouse renovations are being funded by Governor’s Local Government Support Grant funds which were released by the state last year at the height of the COVID pandemic.

“All county funds belong to the taxpayers,” said County Mayor Chad Graham, “and we always have that in mind. But these funds don’t come from property tax revenues or have any impact on the property tax rate.”

Although requests for proposals for the courthouse renovation project will not be opened until June 17, with work to begin on the project once a contract has been awarded, the county is going ahead and moving commission meetings out of the courthouse during the month of June, so that it can get used to the temporary surroundings before the summer vacation schedules of several courthouse employees.

The full county commission, which meets at 7 p.m. on the second Tuesday of each month, will meet in the Shelbyville Central High School auditorium.

The courthouse renovation project is expected to last through November.

The county’s judicial system moved out of the courthouse in December 2019, and all courtrooms and supporting offices are now located at Bedford County Justice Complex north of Shelbyville. Bedford County Courthouse, on the square, is now dedicated to government functions. The large second floor courtroom is being tweaked in ways that will make it better suited to its purpose as a government meeting room, now that it no longer needs to accommodate judicial proceedings.

The courtroom renovations will include audiovisual improvements enabling spectators, either in person or at home, to better see and hear what is taking place during a meeting. The commission will begin using a package of meeting management software which will track various reports, resolutions, and items. Meeting participants, and even the public, will be able to view not just agendas but various supporting documents.

“The public’s going to have a lot more real-time access,” said Graham.

During the COVID-19 pandemic, the county began livestreaming commission and committee meetings on Facebook. Currently, those livestreams are audio-only, but the new AV system and the meeting management software will facilitate a video livestream, and those watching the meeting at home will even be able to see supporting documents.

Before the pandemic, commissioners sat at long tables in the courtroom, facing the old judge’s bench and with their backs to the audience. In recent months, the tables have been staggered to promote social distancing. But the new setup will have an individual desk for each participant, an elegant look in line with state and federal legislative bodies. The individual desks will also be better able to accommodate participants using wheelchairs or with other mobility issues. The desks will be arranged in groups on either side, facing the middle, so commissioners won’t have their backs to the audience or to the judge’s bench.

Graham consulted with county archivist Carol Roberts, county historian Al Simmons, and with designers to ensure that the renovations will be done in such a way as to preserve the courtroom’s grand historic appearance.

“We are going to do everything we can to preserve this building’s rich heritage,” said Graham.

The county’s planning and zoning office, currently located in Bedford County Business Complex on Dover Street, will move into vacant space on the third floor of the courthouse. This places it closer to offices such as the Register of Deeds and the Assessor of Property, located across the street in Bedford County Courthouse Annex, and to the county’s GIS mapping office on the second floor.

“Having a centralized location that houses our strategic long-range planning, GIS, human resources and county administration gives us the ability to encourage greater communication between managers and improve the efficiency of operations across the board, including overhead expenses,” said Chris White, the county’s planning and zoning director.

“By working together in a more collective setting, our approach to planning can be more collaborative and our ability to serve the general public will improve dramatically…. Overhead costs will also be improved by the county vacating a relatively large suite and being able to enjoy potential rent income from private enterprise.”

When the decision was made to move the judicial system out of the courthouse and into a new facility, county leaders promised downtown merchants that the courthouse would remain an active and viable government building. The renovations will help to ensure that Shelbyville’s square will remain a community hub.

Currently, the public restrooms in the basement of the courthouse are in less-than-ideal condition. The courthouse project will include a complete renovation, converting them into modern facilities with access for those with disabilities. The project will be designed in such a way that when special events are held on the square, such as the First Square Fair or the annual Christmas Parade, the restrooms can be opened to the public even when the rest of the courthouse is locked and secured.

Graham said he believes the renovation project will be a responsible, forward-thinking use of the state grant funds.