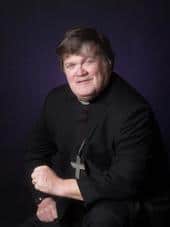 TULLAHOMA – Reverend David Albert Rubke passed away at Southern Tennessee Health Systems in Winchester on October 17, 2020 after many years of significant health challenges. He was 68 years old.
David was born on November 14, 1951 in San Francisco, California to Patricia Mae Mahoney Duran and Ernest Herman Rubke. David was baptized into the faith as an infant at Christ Church Lutheran in San Francisco, and he affirmed his faith when he was confirmed at Hope Lutheran Church in Daly City in 1964. He, like many in the Rubke family, attended Concordia Lutheran High School and Concordia College in Oakland, California. It was there where he met his future bride, Rebecca “Becky” Joyce Donaldson. David left The Golden State and followed the love of his life to The Windy City of Chicago, where they both attended Concordia Teachers College. They were united in matrimony at Faith Lutheran Church in Tullahoma, Tennessee on June 16, 1973. God blessed their union with four wonderful children, Rachel, Jonathan, Michael, and Timothy.
When David was called into the ministry, he attended Fort Wayne Theological Seminary in Indiana, earning his Master of Divinity degree. He was ordained into the office of the holy ministry at Augustana Lutheran Church in Hickory, North Carolina in the fall of 1984. Now known as Pastor Rubke, he spread the Gospel to many congregations across the country. His ministry took him and his family to Alabama, Iowa, and Arkansas, as well as a few other places where he filled vacancies. Pastor Rubke remained faithful to his calling for 36 years.

David was a kind and compassionate man, who cared more about the welfare of others than his own. He poured love into every person that he met. He fed people who were hungry. He sat with people who were sick and dying. And he ministered to the tired and weary. He himself faced many trials throughout his life, but that did not prevent him from living a beautiful life filled with things that brought him joy. Ministry, his family, and music were at the top of that list. David was an incredibly talented musician who loved many genres of music, but his greatest love was composing and performing church music. The Rubke home was always filled with music, and David made sure to instill his love of music to all his children, whom he considered his greatest accomplishment.

David Rubke is survived by his wife Rebecca of Tullahoma, TN; his daughter Rachel (Timothy) Hafner, of Grand Forks, ND; his sons Jonathan (Susan) Rubke, of Tullahoma; Michael Rubke, of Minneapolis, MN; and Timothy Rubke of Tullahoma; and two grandsons Josiah and Balyn Hafner. He is also survived by his brother Mark (Esther) Rubke of Oakland, CA; sisters Beth Rubke of Carson City, NV; and Becky (Buddy) Wall of Santa Rosa, CA; as well as many nieces and nephews. David was preceded in death by his parents Patricia (Ray) Duran, and Ernest (Ellen) Rubke, and his in-laws Fletcher and Myrtle Donaldson.

A visitation will take place on Saturday, October 24, 2020, 1:00-3:00 pm, followed by a service at 3:00 pm, at Faith Lutheran Church, Tullahoma. There will be a livestream of the service on Faith Lutheran Church’s Facebook page. For in person participation, social distancing and mask wearing encouraged.