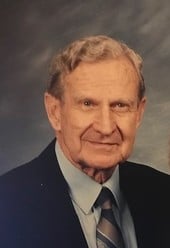 Robert Doyle England, 96, of Tullahoma, TN passed away peacefully at his home on Sunday evening, October 18, 2020. Tullahoma Funeral Home is in charge of arrangements and a private graveside service will be held at Oakwood Cemetery on October 21, 2020 at 1:00 pm with Bro. Herb Hester officiating. He is survived by his wife of 72 years, Ruth Bryant England, his son Robert D. England Jr., his daughter Bonny England Pate, his grandson Charles Robert Pate (Josie), granddaughter Olivia Ruth Pate and great-granddaughter Amelia Pate.

Bob was born March 7, 1924 in New Tazewell, TN to the late Voyd D. England and Pearl Henderlight England. His family moved to Tullahoma in the early 1930’s and he became a member of First Baptist Church Tullahoma on January 1, 1936 where he was an active member and servant throughout his life. As a youth, he traveled each summer
to his family’s East Tennessee farm to work and as a teen he drove a gas truck for his father’s Standard Oil business. After graduation from Tullahoma High School in 1943, Bob joined the US Army Air Forces and served as sergeant and as an aerial electrical/ mechanical gunner on board B-29’s during WWII. He was part of the Southeast Asian Theatre and received several medals and honors as well as the Good Conduct Medal which was a display of his character.

Upon returning to the states after the war, he studied at Tennessee Technological University and received his degree in Mechanical Engineering. During his time in college, he met his future wife and they married on January 30, 1948. They established their homestead in Tullahoma in 1954 where he and his father-in-law built a one of a kind home using stone located on his in-law’s property in Lincoln County.

His house was not only built of rock but it was built on the solid rock foundation of His Lord and Savior Christ Jesus. He worked at the Propulsion Wind Tunnel facility at AEDC until retirement and was an avid pilot that had an enthusiasm for flying his plane. He enjoyed swimming, water skiing and the many trips to the mountains of East Tennessee and most southern beaches on the Gulf of Mexico with family.

He was a man who consistently gave the example of being a believer and follower of Jesus Christ and a faithful servant and steward. He always represented his faith by his words and actions and his life invariably exemplified the fruits of the Spirit: love, joy, peace, patience, kindness, goodness, faithfulness, gentleness and self-control as in Galatians 5:22-23.

He touched so many lives and those that knew him received a great gift and blessing from this strong, loving and humble man.