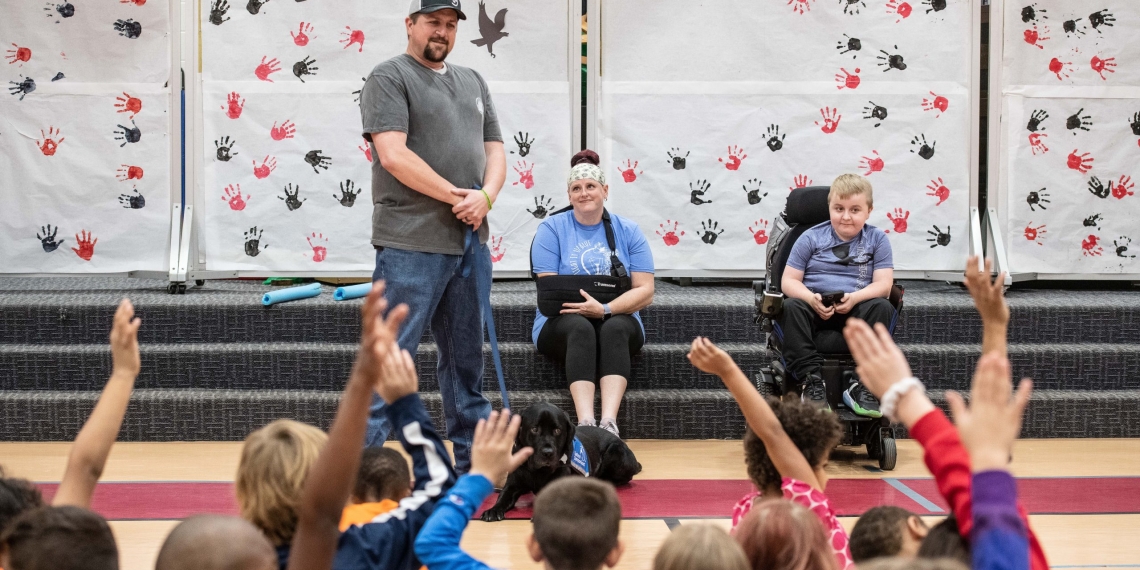 The relationship between East Lincoln Elementary third-grader Ryan Schoonover and his dog, Hern, goes deeper than just man’s best friend. For Ryan, who has muscular dystrophy, Hern is a constant companion who not only keeps him company but also makes navigating the world around him a little easier.

“The best thing about having Hern is that Ryan has a buddy wherever he goes,” said David Schoonover, Ryan’s father.

Earlier this semester, Ryan and his family brought Hern to school for a special presentation to his peers about the importance of service dogs. During the school day, Ryan can be found in class using his motorized wheelchair. At home, he continues to use his wheelchair but also has Hern to help him with daily activities.

“He has his chair because his muscles don’t work quite like yours or mine,” David said during the presentation. “Some things are a little tough for him, including standing up or bending over to grab his pencil. That’s why he qualified to get Hern to help him out.”

Hern has been a part of the Schoonover family since 2019 after putting in an application through Canine Companions. Before joining the Schoonovers, Hern had undergone a vast amount of training to be a skilled companion for Ryan.

“Hern is a very special dog who has trained for nine months at a professional camp where they have other service dogs and trainers,” David said. “It’s an amazing program, and they did a great job with Hern. Canine Companions raises puppies and train them for people who can use them at no charge.”

Hern wasn’t the only one who had to undergo training before coming to live with the Schoonovers. According to David, he and Ryan spent two weeks in Florida, learning all of Hern’s 40-plus commands and how to handle him in public to ensure that Hern is doing his job in aiding Ryan.

As a demonstration, Ryan and David had Hern perform several commands. During the presentation, Hern helped Ryan pick up a cell phone, pull a laundry basket, sit, speak, rest his head on Ryan’s lap and even spoke through a series of barks.

“Because he is trained, we can take him to any public place that we need to go,” David said. “He goes to every doctor’s appointment, the grocery store, the shopping mall and on trips with us.”

One of the most important things Ryan mentioned is that he and his family would appreciate people asking before they pet Hern. When the Schoonovers are out in public, Hern is working to help Ryan in any way he can.

“If you see a service dog while you’re out in public and want to pet it, you can always ask,” David said. “If the owner says yes, you can. If they say no, don’t be offended; they want their dog to focus on their job. It’s like if you’re doing work at your desk and your friend comes and starts talking to you, you would get distracted, wouldn’t you? It’s kind of the same thing. Even when he is lying down, and it doesn’t look like he is doing anything, he is listening for his next command. He really is on duty all the time.”

In 1975, Canine Companions opened its doors out of a home office and garage to help those with physical disabilities. Thanks to the generosity and support, the organization has grown tremendously over the last 47 years. To read more about Canine Companions and the services they provide, visit here.

Top Photo: Earlier this year, Ryan Schoonover (right) and his dad, David Schoonover, and Christina Warren held a presentation regarding the importance of service dogs. The Schoonovers brought Ryan’s service dog Hern with them for the presentation.