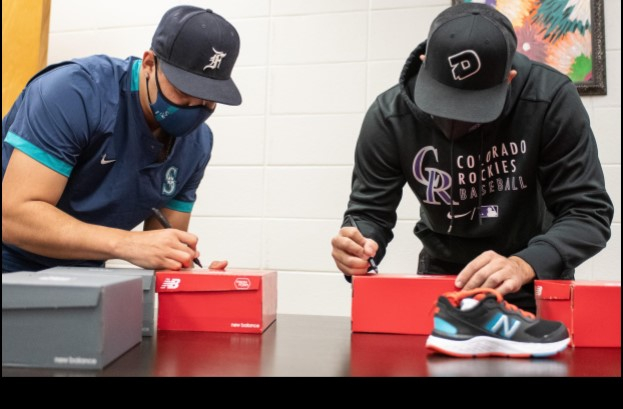 In the spirit of the holiday season, Major Leaguers and former Farrar Frogs Jordan and Justus Sheffield recently donated 54 pairs of shoes to students at their former Elementary School on Monday.

Jordan, a 2013 Tullahoma High School graduate, was a first-round selection in the 2016 Major League

Baseball Draft and now pitches for the Colorado Rockies. Justus, a 2014 THS graduate, was drafted in the first

round straight out of high school and now pitches for the Seattle Mariners. Both Jordan and Justus attended Jack T. Farrar Elementary School.

The Sheffield brothers have made the shoe donation a yearly occurrence, and they love the joy it brings Farrar students.  On top of getting new shoes, each Frog receives the players’ autographs as the Sheffields sign the sneaker box.

“It’s awesome to come back and give back, especially to a school that we went to,” Jordan said. “To see these kids’ faces, it’s special, and it’s something that we really look forward to every year.”

Justus echoed those sentiments but added that his favorite part of the shoe donation is getting to hand-deliver those boxes.

“When they open up the box and see their shoes, just getting to see their face light up is amazing,” Justus said. “We definitely look forward to coming back to Tullahoma and doing this every year.”

From a principal’s perspective, Farrar’s Travis Moore said having alumni give back to their former school is always wonderful. He added that having the Sheffield brothers there in person to donate is an experience that those students will cherish forever.

“It’s absolutely awesome that these two guys continue to support the Tullahoma community and the elementary school they attended,” said Farrar Principal Travis

Moore. “To have them make these donations in person is incredible, and it allows our students to see first-hand what’s possible if they put their mind to it and work hard.”

The Sheffield brothers can make the yearly donation occur thanks to a partnership with New Balance. Additionally, they wanted to thank Clayton’s Shoe Store owner Florence Hull for aiding in making the donation a success.

“She plays a huge role in making this happen,” Justus said. “She gets all of the sizes for the kids and makes sure that everything is correct. She’s been an integral and important part in allowing us to make this happen every year.”

Every time that they enter their alma mater, the two Sheffield brothers say that the memories instantly

come flooding back. For Jordan, he said what he remembers most is first meeting his lifelong friends. On the other hand, Justus has a few more memories, including helping design the chair in the front lobby at Jack T. Farrar Elementary.

“We put some tiles on the chair on there, and that was pretty cool,” Justus said. “Also, being part of the fifth-grade basketball team is a memory that stands out. I think that was the first year when each school had a team. I loved it. It was awesome getting to play the other schools.”

After the Major League Baseball season wrapped up, both Jordan and Justus returned home just in time to watch the Tullahoma football team put together a magical season that saw THS capture its first state title. Specifically, the pair were excited to watch their younger brother, Jaxon, a junior who plays both on the offensive and defensive side of the ball for the Wildcats.

“That was definitely one of the cooler moments that I was able to witness,” Jordan said. “For those kids, they’ve been working on that goal for years. They came up and went to middle school together, and now they’re in high school. Just seeing those kids grow up, want something, strive for it and accomplish something that nobody has ever done, it’s awesome.”

Both Sheffield brothers said they keep Tullahoma close to their hearts even when they are on the road and playing on the West Coast.

“With the help of social media, keeping up with Tullahoma and the athletics here is easier now,” Justus said. “It’s been awesome to see, and it’s cool to come back and be a part of things that are happening here.”