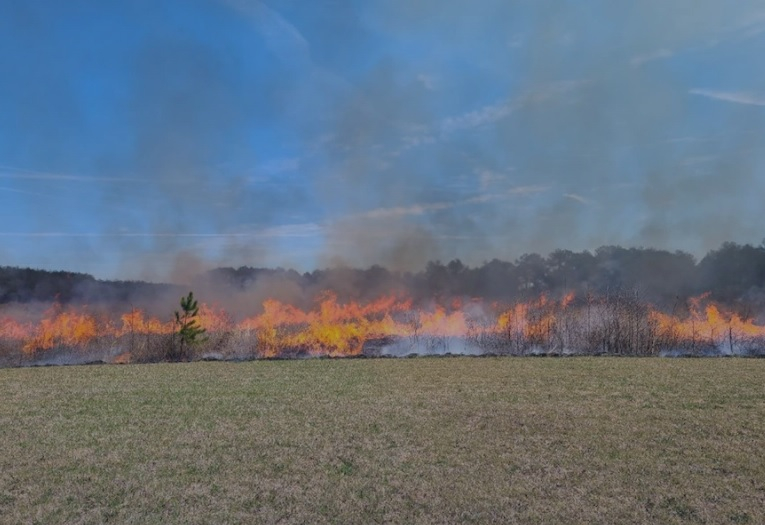 Prescribed fire is the most efficient and economical tool when managing our natural ecosystems.

It allows land managers to alter and improve the native ecosystems without using costly methods such as bush hogging, under brushing or herbicide applications, which can also have long term negative effects on soils and waterways.

The majority of prescribed fire operations at Arnold Air Force Base occur from March through May. During this timeframe both weather and fuel conditions are generally conducive to accomplishing the prescribed fire management goals of the Arnold AFB.

Arnold AFB currently uses prescribed fire to create and maintain habitat for rare, threatened and endangered species, such as the Henslow’s sparrow in grassland ecosystems. Prescribed fire is beneficial in many ecosystem types as there is normally a flush of regeneration on the forest floor in the following years that provides low browse, cover, nesting areas and other benefits for turkey, deer and a variety of other wildlife species. The use of prescribed fire promotes new growth by removing dead vegetation and suppressing undesirable woody species that could eventually dominate the forest in the absence of fire.

Arnold AFB uses prescribed fire for fuels reduction for two main reasons. One is to reduce fuels to help lower the chances of a wildfire. The second is to reduce the intensity and rate of spread of a wildfire if it does occur. Low fire intensity and rate of spread make it easier for firefighters to contain a wildfire. Fuels reduction is accomplished by periodically using a low intensity prescribed fire to consume dead fuels, such as leaves, broken branches, dead grasses and other timber litter. The goal of reducing fuels with prescribed fire is to not kill the forest overstory, but to burn up accumulated fuels on the forest floor to decrease the chances and severity of a future wildfire.

Proper utilization of prescribed fire is both art and science, as it takes a combination of fuel conditions, weather conditions, smoke management, ignition techniques and timing to result in the appropriate fire intensity to accomplish site specific management goals.

If you happen to be traveling near an active prescribed fire at Arnold AFB always keep a safe distance. Please refrain from stopping along roadways or intersections near the prescribed fire as this can cause a dangerous situation for wildland firefighters and other motorists.

Pictured is a prescribed fire, or controlled burn, at Arnold Air Force Base. Prescribed fire is the most efficient and economical tool when managing natural ecosystems, allowing land managers to alter and improve the native ecosystems without utilizing more costly methods such as bush hogging, under brushing, and herbicide applications. (Courtesy photo)