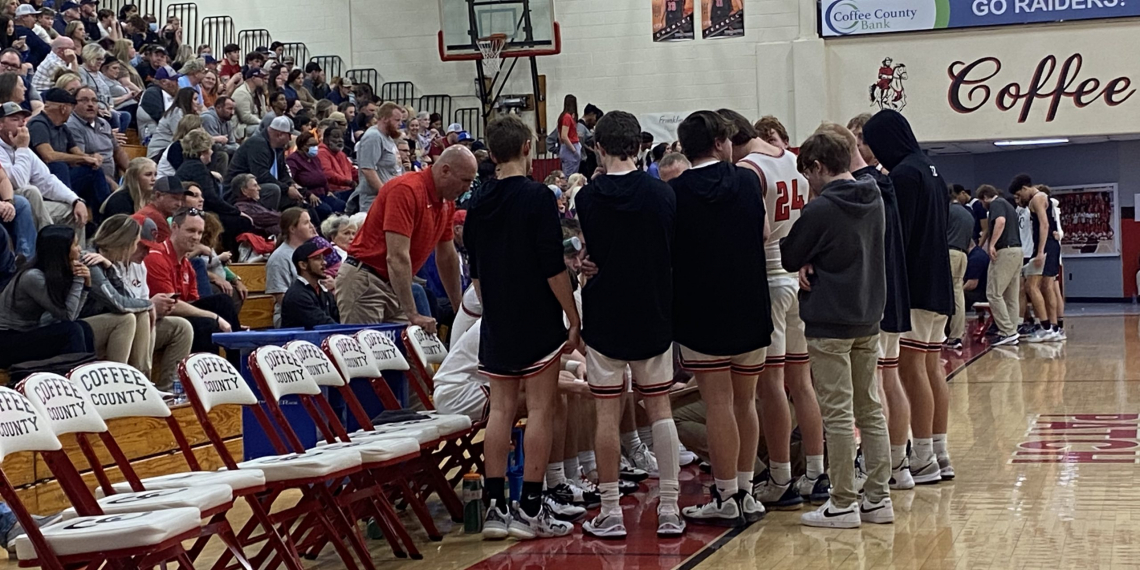 The Coffee County Red Raider boys’ basketball team dropped 8 of their 9 three-point shots in the first half of the Region 3-4A semifinal game on Tuesday night. Those shots and a great defensive game plan helped the Raiders defeat Franklin County 64-47.

Dayne Crosslin had a huge night against the Rebels as he hit five 3’s in the first-half on his way to a game high 25 points. Crosslin earned the Sir Pizza Player of the Game. Jackson Shemwell had one his best games of the year, scoring 10 off the bench. Brady Nugent and Connor Shemwell were held scoreless in the first 2 quarters but hit big shots down the stretch. Nugent had 9 points and Shemwell who was doubled, and triple teamed finished with 7. Phinehas Rollman added 7, Aidan Abellana chipped in with 4 and contributed several assists. Jahlin Osbourne had 2 points, but he also played big on defense and had multiple rebounds.

The 22-9 Red Raiders are one of only 16 teams left in the TSSAA playoffs in Class 4-A. Up next at the Joe Frank Patch Memorial Gymnasium at Coffee County High School will be the Walker Valley Mustangs as they ride into Manchester on Thursday night for the Region 3-4A Championship at 7 p.m. Airtime is set for 6:50 p.m. on The Rooster 101.5 FM, rooster1015.com and The Rooster 101.5 app.