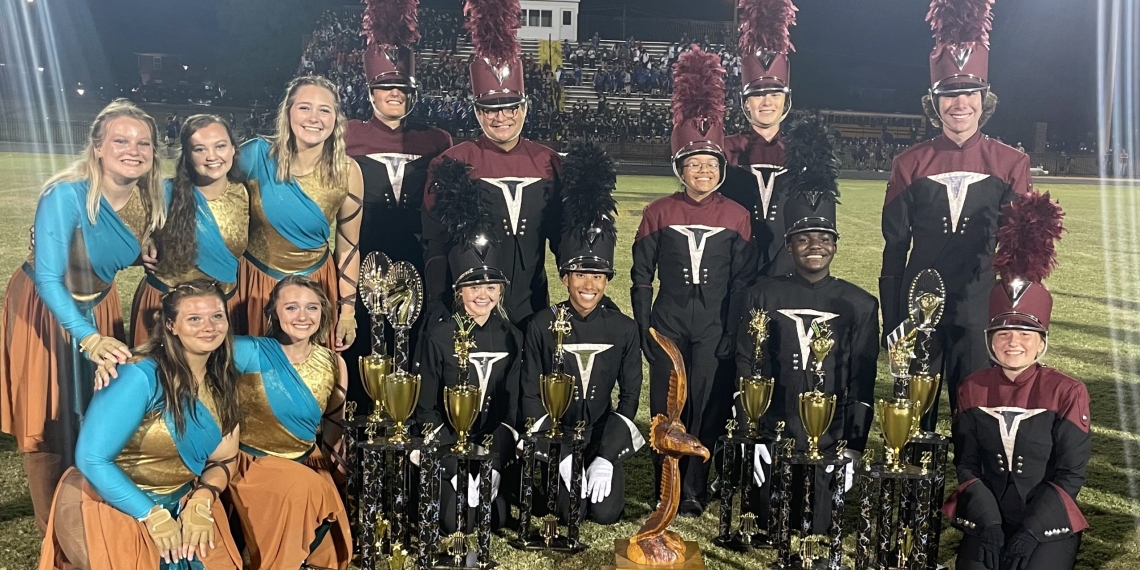 The end of September and early October were good for the Tullahoma High School MarchingBand as it brought home several first-place trophies, wrapping up competition season on a positive note.

“I love listening to and watching the Tullahoma Band perform. The students and their directors represent Tullahoma to the highest standard,” said TCS Director of Schools, Dr. Catherine Stephens. “The THS Band is a consistent model of excellence in our community and across the state.”

During the competitions, the THS Band performed its 2022 show titled “Lost and Found.” The set features music from the TV show Lost and the Broadway musical Dear Evan Hanson. Additionally, the performance featured music from the movie The Abyss as well as Samuel Barber’s “Madea’s Dance of Vengeance.”

Against 17 other bands from Tennessee and Alabama, Tullahoma brought home a swarm of awards at the Hendersonville Golden Invitational Contest on Sept. 17. The THS band brought home the overall Grand Champion trophy and first-place trophies in music, visual and color guard as well as a second-place effort in percussion.

The success was even more personal for Tullahoma Co-Director Justin Scott. While he was a freshman at McGavock, Scott was part of the band that won the same contest. Tullahoma previously won the Hendersonville Golden Invitational Contest in 2005, 2006 and 2007.

“An interesting fact about the Grand Champion trophy is that it is a perpetual style award that is returned each year, then the winner’s name is permanently placed on the side,” Scott said. “The kids thought it was cool to share the history, and we are so proud of our young students.”

“We are extremely proud of our students for their accomplishments,” Scott said. “They poured their heart and soul into preparing for this show, and it definitely shows each week in their performance.”

Following competition season, Tullahoma took part in its annual March-A-Thon, which occurred on Oct. 15. Through corporate sponsorships and individual student pledges, the THS Band was able to raise over $37,000.

“The money raised from this fundraiser will go towards the purchase of new instruments, instrument repairs, and into student accounts towards camp fees and future trips,” Scott said. “The March-A-Thon itself went extremely well. We had great weather and great audiences everywhere we went.”

Fans wanting to see the THS Band perform its “Lost and Found” show for the last time will be able to do so this Friday night at halftime of the Wildcat football game. Tullahoma takes on Glencliff beginning at 7 p.m.

Photo provided: Members of the Tullahoma High School Band and Color Guard celebrate after being named Grand Champion at the Hendersonville Golden Invitational Contest on Sept. 17.