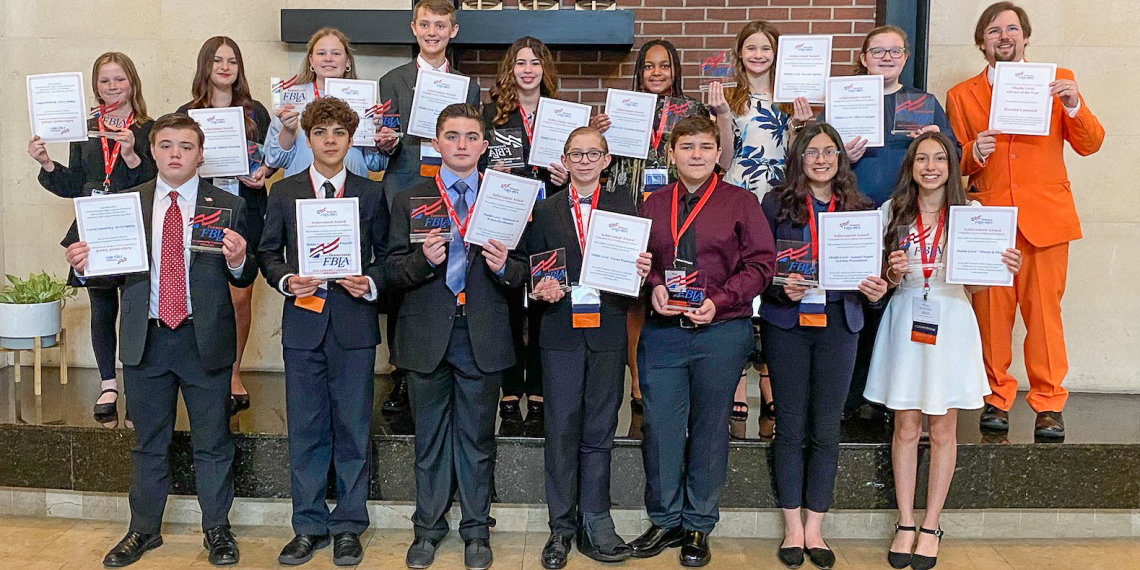 Twenty-two Tullahoma City School students will have the opportunity to compete at nationals after having stellar outings at the Future Business Leaders of America Tennessee Leadership Conference held in Chattanooga last week.

All 15 state participants from West Middle School earned spots to nationals, while Tullahoma High School had seven qualifiers. The FBLA National Leadership Conference is from June 29- July 2 in Chicago at the McCormick Place Convention Center.

At the middle school level, West left the State Leadership Conference with 11 state champions. Included in those top performances was a perfect score, as Cambree Moyers and Thomas Cunningham teamed to take the top spot in the Exploring Business Issues event.

“These students have worked so hard, and each one has achieved their goal by making it to Nationals,” said West FBLA Adviser Franklin Cammack. “It really is hard for me to find the words to describe how proud I am of these students. My entire chapter qualified for Nationals. Who else can say that?”

While the West Middle School students received honors, so did their adviser. For his contributions and his students’ successes, Cammack was selected as this year’s Tennessee FBLA Adviser of the Year. According to Cammack, he’s been part of FBLA at every level, competing as a high school member and even the Tennessee President of Phi Beta Lambda, FBLA’s collegiate division. Once he began his teaching career, he became a high school adviser and now serves in this role as a middle-level adviser.

“FBLA is the main reason why I went into the teaching profession. To be named Adviser of the Year is quite the honor because this is something that I have worked my entire career to achieve. This honor highlights the years of hard work that I’ve put into FBLA. I couldn’t be happier. In the summer, I will get to walk across the National stage representing Tennessee, which is pretty exciting. My next goal is to make it on to the FBLA Wall of Fame, which I’ll be eligible for in four years. Until then, my goal is helping West Middle School students bring home wins at Nationals in Chicago.”

At the high school level, Tullahoma was led by a pair of first-place performances. Biftu Regaa finished first in Business Ethics, while Brady Welch took the top spot in Introduction to Parliamentary Procedure. THS also had a five-student team take second place in the Parliamentary Procedure. Garnet Cuello, Anna Chamblee, Katie Ellis, Kassidy Northcutt and Angelina Robertson all finished second in the event.

“I cannot be more thrilled with how our FBLA students performed at the State Leadership Conference,” said THS Principal Jason Quick. “Having Biftu and Brady place first in the state for their respective events is tremendous as they have both consistently shown strong skills, knowledge and business acumen in their classrooms. Plus, having the team of Garnet, Anna, Katie, Kassidy and Angelina do so well further shows that we have some of the most talented young people in the state. Under the guidance and direction of Ms. Valerie Robinson, our FBLA organization continues to represent THS and the community with pride.”