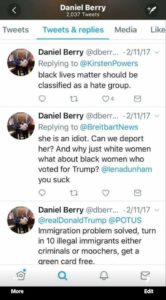 A local politician who is running for Mayor of Tullahoma, Daniel Berry, is facing questions about comments he made on Twitter in 2017.

Local resident Vollie Stone posted what Berry stated on Facebook this week, but also posted his own comments concerning Berry. He called Berry a racist, a caveman and traitor.

In the 2017 Twitter posts by Berry he mentions Black Lives Matter, immigration and more.

You can read his tweets at OnTargetNews.com

On Target News reached out to Mr. Berry for comment and decided to post his statement on Facebook Wednesday night. It said in response to the tweets; “A 140 character tweet taken out of the context of the times does not define who I am. Considering the divisive and polarizing nature during that time, observing the senseless violence I was admittedly emotional when thinking of my family and friends who act as first responders.”

Berry continued, “Today, Black Lives Matter is an organized movement changing our world for the better by bringing light and a voice to real issues people right here in our community face every day.”

Berry stated, “The work I have done in our community, the ideas and solutions I’ve shared with you, and the countless conversations on how I can fight for you tell my story.”

“Saturday our city will be host to a March for Peace. This is an opportunity for Tullahoma to serve as an example to other communities on how we can peacefully gather as neighbors to stand together on issues that are important to us. I will be attending, and I encourage everyone who is able, to join in this day of peace and prayer.

and a plan but was not ready to do so at this point.”

In a statement to On Target News, Mr. Stone apologized for calling Berry a racist, but did say the tweets were a bad misjudgment by Berry. Stone’s Facebook post has been removed from his page.

Lions Club Awards United Way of Highway 55 $5,000 towards for their COVID-19 Response Fund