In its first-ever Blue Cross Bowl State Title Game, Tullahoma was the team left standing in a heavyweight fight on the gridiron, leaving Chattanooga with a 21-14 double-overtime victory over Elizabethton in Saturday’s Class 4A matchup.

In a game heard live on 93.9 The Duck, the Wildcats landed the final blow in this heavyweight battle after they scored to take the lead in the first half of the double-overtime period. On second-and-goal from the 10-yard line, Elizabethton quarterback Bryson Rollins looked to connect with Jake Roberts on a pass attempt. Tullahoma’s Krys Uselton was able to jump the route and snagged the game-sealing interception to seal the Class 4A Championship for the Wildcats.

“It’s amazing. To be a champion, it’s the best feeling in the world,” Uselton said. “In the first overtime, they ran it with 10 [Rollins] a lot, so we went into that second overtime to try to stop the run. I knew that I was going to get the matchup against Roberts, and I was ready for it.” 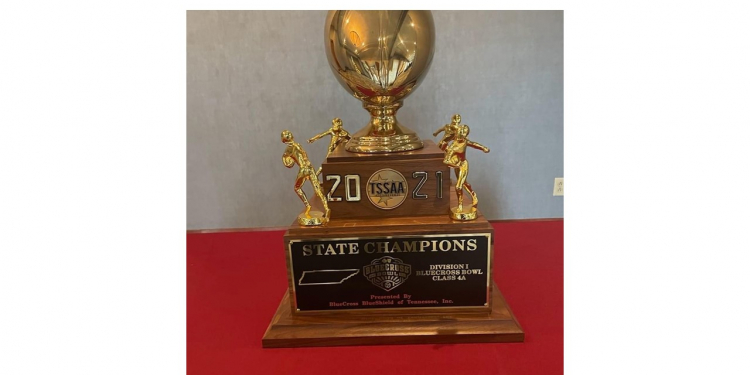 Tullahoma capped off its first undefeated season with a 15-0 record and stopped the Fighting Cyclones from winning their third-straight state title. After 29 seasons at the helm of the Wildcats, John Olive captured his first-ever state championship.

“When you’re my age, you really think that you’re not going to win a state championship,” Olive said. “Fortunately for me, we had an outstanding team this year. Really for the last two years, these teams have played really well. I’m very fortunate that we won this game in overtime.”

After a scoreless first quarter, Tullahoma put up the contest’s first points 47 seconds into the second period. On a quarterback keeper, Ryan Scott held on to the football and scored from 8 yards away. Justus Chadwick, who was perfect on his extra-point attempts, booted in the PAT to put the Wildcats in front 7-0.

Elizabethton answered back and tied the contest with 4:31 remaining in the first half. Rollins connected with Roberts for a 3-yard touchdown, and the teams headed into halftime deadlocked at 7.

Neither team could get back on the scoreboard during the remainder of regulation. However, Tullahoma did have an opportunity late in the fourth quarter after marching down to the Elizabethton 2-yard line.

On fourth-and-goal, the Wildcats elected to go for the touchdown rather than kick the field goal. Scott held on to the football on a quarterback sneak but was short of the end zone with 2:29 left on the clock. According to Olive, he and his staff went into Saturday’s matchup with the game plan to be aggressive. However, after failing to score, he said he had his second guesses.

“I really thought that I had cost us a state championship by not kicking a field goal there, to be honest with you,” Olive said. “I’m very fortunate that our young men bailed me out.”

Tullahoma’s defense forced Elizabethton to punt one final time, as the Wildcats attempted to win in regulation. With three seconds remaining, Scott took off running before lateralling the ball to Uselton. From there, Uselton was able to churn out yards, tight-roping the sideline, before falling at the Fighting Cyclones’ 11-yard line as the clock expired.

Elizabethon opened the first overtime with ball possession, starting at the Wildcats’ 10-yard line. Three plays later, Rollins scored on a 1-yard touchdown run to give the Fighting Cyclones a 14-7 advantage.

Just one play into its offensive possession, Tullahoma tied the contest. KeiShawn Cummings broke free for a 10-yard touchdown run as the teams headed into the second overtime even at 14.

The Wildcats struggled to move the ball on the first two plays of the second overtime. However, on third down, Scott found Dixon in the end zone for a 5-yard touchdown to put Tullahoma in front 21-14.

According to Uselton, his basketball teammates had tried to convince him to play football for the Wildcats. In his final year at Tullahoma, he agreed to give the gridiron a go.

“My teammates kept asking me and told me that I needed to play,” Uselton said. “I figured it was my senior year, so I said, ‘Why not? Let’s go and try and win a championship.’ A lot of the game came to me naturally, but my coaches and teammates have also been giving me advice and have continued to push me. They are the reason that I am the player that I am today.”

While Uselton made the game-winning play, Scott was named the Class 4A Championship’s Most Valuable Player. The senior quarterback completed 12 of his 16 pass attempts for 124 yards and a touchdown while also being intercepted once. Scott also ran for 88 yards and a touchdown on 16 carries. 93.9 The Duck named Uselton and Scott Co-Giles Dunn Diamond Company players of the game.

Elizabethton had 300 yards of offense during Saturday’s contest, the majority of which came from their quarterback. Rollins passed for 131 yards and a touchdown, while he also ran for 140 yards and a score.

“Trying to tackle Rollins is like tackling a rock,” Olive said. “He is a gritty football player. Our defense is what kept us in the game.”

The last two seasons had been historic for the Wildcats as they combined for a 27-1 record. According to Olive, his players only cared about winning, which allowed Tullahoma to succeed on the field.

“For the last three years, this has been a complete joyride, particularly the last two years with these seniors,” Olive said. “They are absolutely outstanding, the most fun group to be around and the most talented group of kids. They have been an absolute blast to be around. What made this team special was that they discovered what team chemistry is all about. They weren’t worried about who got credit or the glory. Throughout our playoff run, it’s been different players who have made plays, and that’s what has made this team so awesome.”

As one of Tullahoma’s more vocal leaders, Ian Poe said he knew that his team would capture the state title. The senior lineman said he’s proud of his teammates now that the goal has been achieved.

“It feels awesome,” Poe said. “As Coach Olive says, we are a unique bunch. Everybody doubted us all season, and we took that to heart, and we pulled through. Everybody just thought it was our lucky year. We were set on making a statement and following it the whole way through, and that’s exactly what we did.” 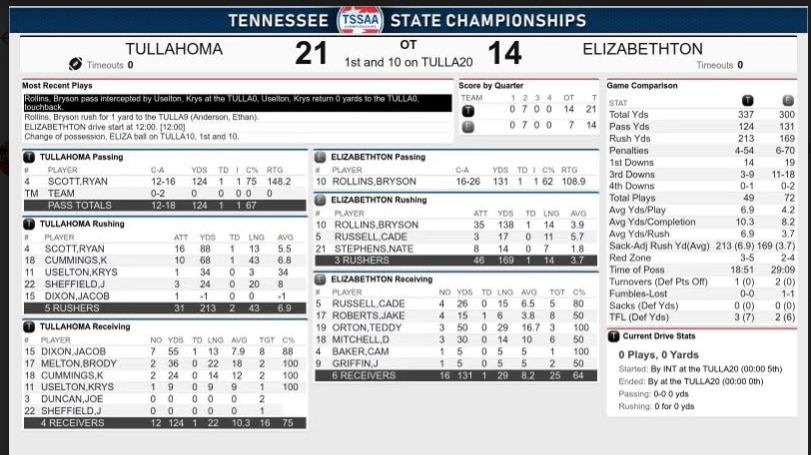 Thanks to Zach Birdsong for his help this season for story information and pictures.