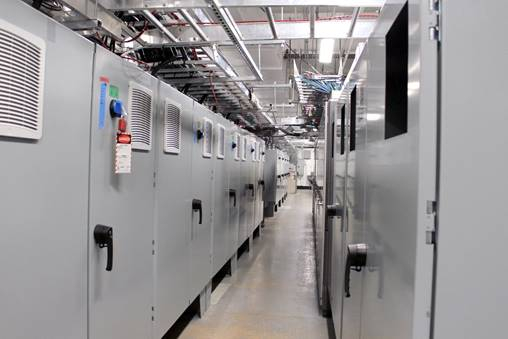 A $13 million dollar project to upgrade the nozzle drive motors for the Arnold Engineering Development Complex 16-foot supersonic wind tunnel, or 16S, at Arnold Air Force Base is complete as of early October.

While the last customer test in 16S was completed in 1997, a new investment of $60 million dollars is expected to relaunch the tunnel as an active testbed this winter after four years of restoration and modernization.

“One of the key efforts to making this happen is successfully completing the nozzle drive motor installation,” said Tyler McCamey, Future Capabilities Program manager for 16S projects. “The nozzle is one of the main features needed to operate any wind tunnel test facility.”

The contract to upgrade the nozzle was awarded in January of 2018, and members of the Propulsion Wind Tunnel, or PWT, team at Arnold are now able to finally close this chapter.

“A total of 108 new motors had to be installed on 108 jacks that move the flex nozzle,” said Will Layne, PWT electrical system engineer. “That’s 54 motors on each side – 27 motors on the top jacks and 27 motors on the bottom jacks. The checkout process has been complicated.”

“A lot of the equipment we’re working with is what drove the original motors that were installed in the late 1950s,” Ruehling said. “While they formerly had no way to know the torque required to turn a ball screw, short of feeling the push back from a manual hand crank, we can now control and view that and much more data on a screen.”

These motors flex the nozzle to generate supersonic speeds in 16S.

The nozzle walls are 16 feet tall, over 100 feet long and are made of steel that is an inch thick. They were originally designed to provide variable Mach number flow.

“To do this requires the ability to reshape the nozzle walls into different mathematical contours,” McCamey said. “It is like a huge robotic transformer that can shapeshift to provide the correct constriction and expansion of air to create supersonic flow. It is the largest tunnel in the world for these air speeds, making it a critical national asset for programs that want to test up to Mach 3.7.”

Previously, one of the biggest technical challenges for 16S was getting the nozzle to flex and achieve the desired shapes efficiently.

“Though state-of-the-art when it was designed, the nozzle used hydraulic motors for movement and tape reels to measure distances within thousandths of an inch, using an archaic control computer by today’s standards,” McCamey said. “One of the technical challenges was identifying replacement electric drive motors that can survive the harsh environment of temperature and partial vacuum inside the tunnel and that would fit a space not designed for them.”

Layne added that now that the goal is to operate the tunnel at even higher temperatures than it had once ran, part of the project included installing a cooler system.

“The old hydraulic power piping has been repurposed to now become the cooling lines for the new motors,” he said.

Another challenge for the 16S team has been learning how to get the nozzle to move in such a way that the metal wall doesn’t become overstressed. From a computing technology standpoint, it was a significant technical challenge to get over 100 motors to simultaneously interface with a central control computer from the 1980s. This same computer will be used for the initial relaunch of the facility, though it is planned to be replaced as part of a follow-on project.

“This project has been an exercise in laying new technology on top of 70-year-old hardware that is still capable of providing test conditions for state-of-the-art aeronautics,” McCamey said. “During the commissioning phase, the team has witnessed the most efficient and reliable nozzle movements the facility has ever accomplished. It is a demonstration by AEDC that we can keep our assets on the cutting edge by wisely leveraging upgrades to the historical investments.”