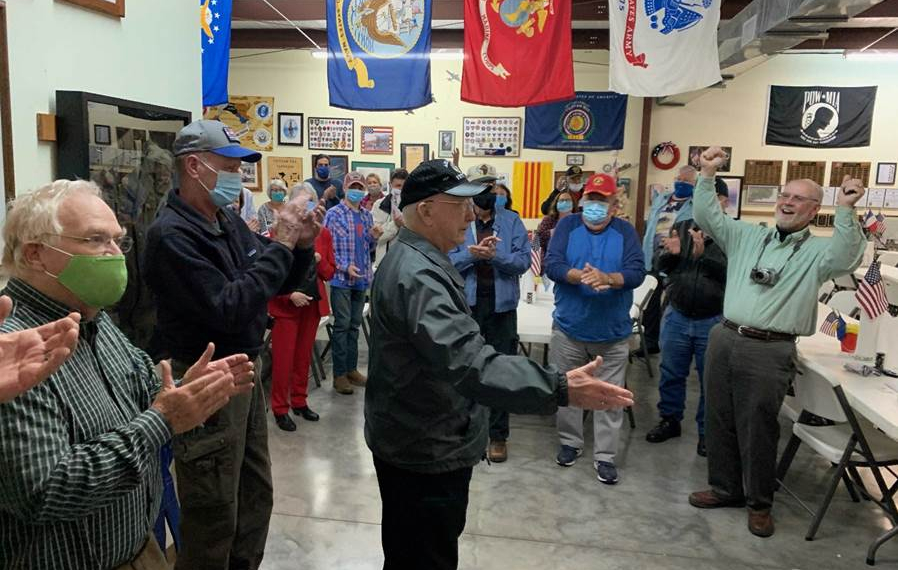 The surprise celebration included reading the long list of accomplishments he has made to the local VFW Post in the past few years, all while in his 90’s. Post Commander Kim King noted that the influence and devotion that Ed displays for the Post and our community set a standard of excellence to which we should all aspire. If VFW holds a meeting or event, Ed Reader is there. He continues his lifetime of service as Post Trustee.

In attendance were Coffee County Mayor Gary Cordell, who thanked Ed for his contributions to Coffee County and the nation; Bob Brinkmann, Commander of American Legion Gold Post 78; Janice Lynn Bass, who presented Ed with a Patriotic quilt from the Quilts of Valor Foundation; Westwood Middle School Assistant Principal Jim Dobson, who presented Ed with a beautiful poster painting done by middle school students in honor of Ed’s 97th birthday.

Coffee County Central High School’s Culinary Arts Department had prepared the meals for the party; after the celebration, Jim Dobson delivered 15 extra boxed dinners to the Manchester Fire Department for the members on duty.

Ed Reader, Sr, was born October 18, 1923 in Rome, New York. He enlisted in the Army Air Corps on June 30th, 1942 and quickly earned his Aerial Gunner’s Wings as a Waist/Door Gunner aboard B-17 Flying Fortress bombers.

On May 18th, 1944, Ed was on his 23rd combat bombing mission over enemy territory, flying in formation with 34 other B-17s. Their mission that day was to destroy the Romano Americano Oil Refinery, in Ploesti, Romania in an effort to reduce Axis oil production, which was critical at that point in the war.

The formation was attacked by 100 enemy fighters. Ed recalls that one of the German Luftwaffe fighter planes came so close that he could see the pilot’s face.

His bomber came under blistering attack: Ed was shot in the right shoulder by a 22mm bullet, which traveled down his arm and stopped just above his elbow. The bomber’s left-wing engines caught fire and the crew was forced to bail out. Ed, desperately deploying and guiding his parachute with his left arm, watched his ship plummet to the ground in flames. Upon reaching the ground, he and his fellow crewmembers were immediately captured by German forces.

The enemy carried Ed to a makeshift hospital where the bullet was drilled and extracted from his arm with no anesthesia or pain medications. He remained a prisoner of war until October 23, 1944.

For the heroism and determination displayed by Ed Reader, his crewmates and the  other bomber crews during that vital mission, the 463rd Bombardment Group, to which  Ed was assigned, received the Distinguished Unit Citation, later called the Presidential  Unit Citation.

After his military service, Ed enjoyed a career in banking. He continues to serve his fellow veterans, and his community, in any capacity he can.