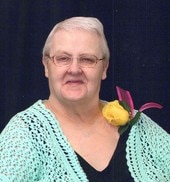 TULLAHOMA – Funeral services for Ms. Emma Jewell Lowe, age 78, of Tullahoma, will be conducted at 1:00 PM on Friday, September 18, 2020, at Manchester Funeral Home. Burial will follow in Farrar Hill Cemetery. The family will receive friends from 12:30 PM until the time of service on Friday, at the funeral home. Ms. Lowe passed from this life surrounded by her loving family on Monday, September 14, 2020, at Life Care Center in Tullahoma, TN.

Jewell was born in Manchester, TN on February 10, 1942, the daughter of the late Harvey and Daisy Turner. She attended Coffee County High School, worked at Bob Patton Food Town, and sold Tullahoma News newspapers with her husband. Jewell loved her grandchildren more than anything in the world. She was a loving wife, mother, grandmother, great-grandmother, and friend.