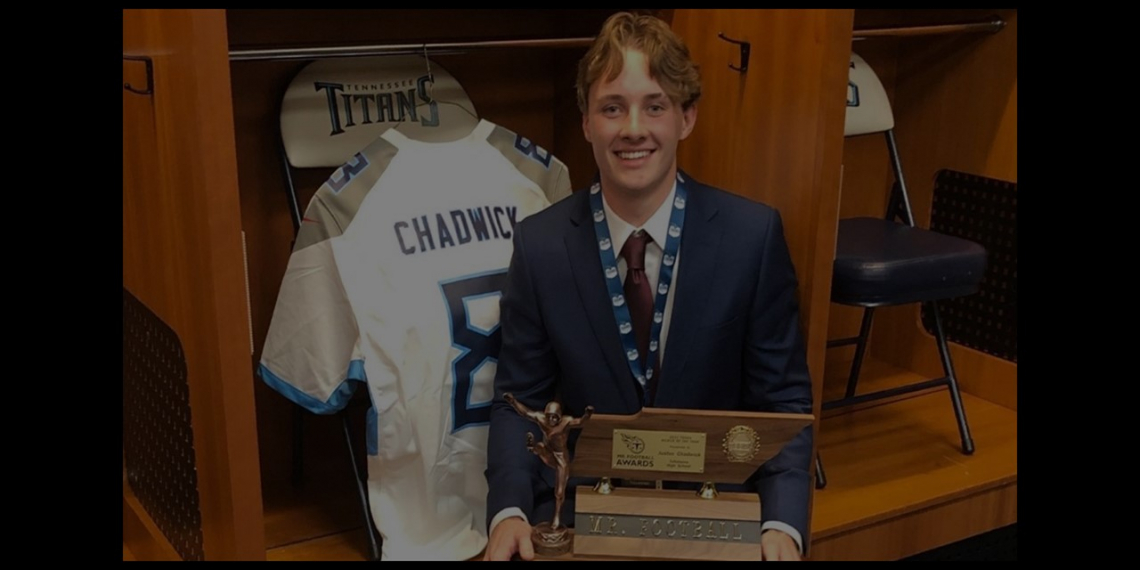 After a celebratory weekend that included a state championship victory, the accolades keep coming for the Tullahoma football team. Senior Justus Chadwick was named the 2021 Tennessee Titans Mr. Football Kicker of the Year Award at Nissan Stadium in Nashville on Tuesday.

“It feels unreal right now, especially after this past week. It feels like it’s a cherry on top of everything,” Chadwick said. “These last few days have felt like a fever dream, where it feels like it’s just too good to be real. It’s just been a perfect athletic week for me. I never thought that I’d be here in this situation with a state championship and the Mr. Football Kicker of the Year Award. It’s crazy.”

During his final year at Tullahoma, Chadwick put together a strong season that saw him connect on 60 of 62 extra-point attempts. He additionally made six of his nine field-goal attempts, including a season-long 49-yard kick. Lastly, he averaged 37 yards per punt on 14 opportunities.

“He is the best kicker and punter that I have ever had the privilege to coach,” said Tullahoma Head Coach John Olive. “For him to be recognized by the sportswriters across the state of Tennesee as the best kicker in the state is just absolutely awesome. It’s a great way to conclude the year with him getting that individual accolade.”

Tuesday’s award comes on the heels of a weekend where Tullahoma won its first state title in program history. The Wildcats defeated two-time defending state champion Elizabethton 21-14 in double overtime to win the Class 4A trophy.

“It was all about team chemistry, and it’s like we are all linked telepathically,” Chadwick said. “As Coach Olive has said, we found what team chemistry was. We were going to take care of business, and we weren’t going to back down.”

While Tuesday’s award announcement was shocking, Olive said Chadwick worked extremely hard to make this goal achievable during the offseason. The Wildcats ended their 2020 season with a 15-14 loss to Nolensville. Chadwick was back on the football field practicing for the 2021 campaign the following day.

During the offseason, he attended multiple camps and competitions to improve as a kicker. Before the start of this season, Chadwick was honored for his dedication as he was selected to wear No. 8 for the Wildcats, an honor to remember former Wildcat Eli Grow, who died during a 2016 car accident. Grow was known as one of the hardest-working players who went the extra mile to improve as a player.

“To wear No. 8 for our football team, you have to be a young man who goes way beyond what we ask,” Olive said. “Justus was recognized for the effort that he put in between last November and when we selected who would wear that number in July. We were put out of the playoffs there at home on a Friday night against Nolensville, and Justus started working toward the 2021 season the very next day. He goes the extra mile. He’s traveled to camps all over the place. He just does everything that he can possibly do to be the best at his craft.”

Chadwick had to wait until the very end of Tuesday’s reception to find out he was a winner. The Kicker of the Year was the final category announced, and Chadwick said he was a nervous wreck awaiting the results.

“I got there back behind the stage, and I was talking with one of my buddies who is also a kicker, and I was just trying to calm my nerves,” Chadwick said. “I was just shaking, and my heart was beating really fast. It was like an adrenaline rush. As soon as they called my name, it was like a huge rush of relief. I can’t believe that this just happened.”

After capturing the Mr. Football Kicker of the Year Award, Chadwick has been invited back to Nissan Stadium this coming Sunday to be the 12th Titan. All 10 Mr. Football winners received the invitation as the Tennessee Titans host the Jaguars this Sunday at 12 p.m.