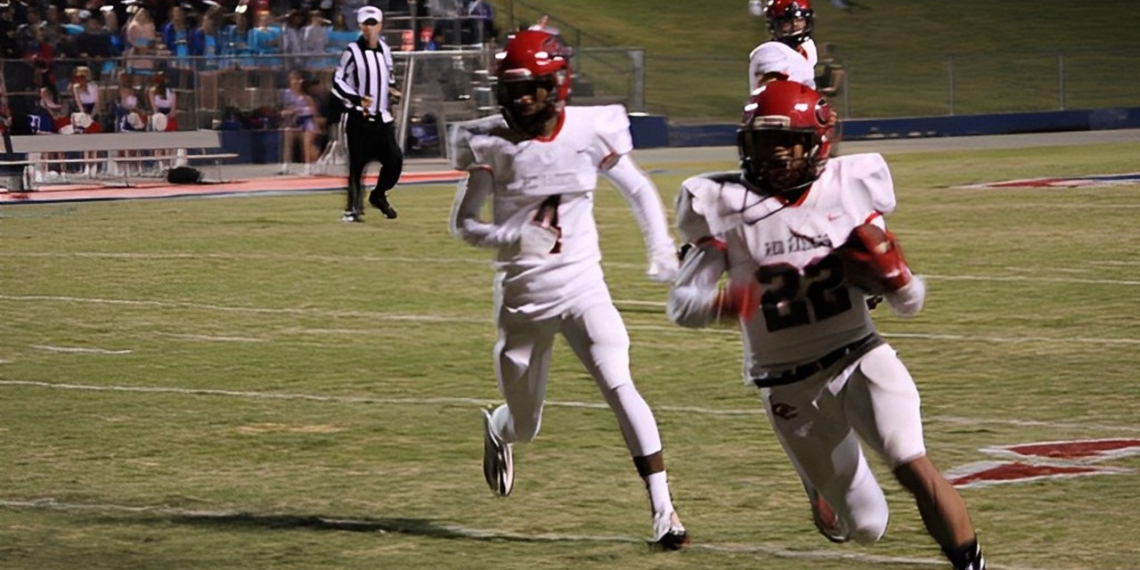 On Friday night in McMinnville the Warren County Pioneers were celebration Homecoming. They received the opening kickoff and drove to inside the Coffee County 10-yard line, but the Raider defense stiffened and forced a 23-yard field goal to give the Pioneers a 3-0 lead.

When Coffee County received the kickoff, the offense went to work. Quarterback Cole Pippenger and Raiders powered through the Warren County defense on 12 play drive for the games’ first touchdown. “Pipp” capped on the drive as he ran over a defender for a 12-yard TD run. The Raiders led 7-3, after getting the ball back Coffee County would score again, this time it was Konor Heaton taking an option pitch to the endzone from 20 yards out to extend their lead to 14-3 at halftime.

The begin the second half Coffee County got the ball first and 8 plays later Pippenger would score his second TD on a 34-yard run to give the Raiders a 21-3 advantage.

Warren County tried multiple Wing-T runs and passes the working against the very tough Coffee County defense. It was that Raider defense that forced a fumble and Brendon Sheppard recovered. The offense went back to work. The O-line dominated the Pioneer defensive front helping Coffee County push their way into the endzone on a Heaton 1-yard plunge for a 28-3 lead. A few minutes later Raider fans saw Heaton score his third touchdown in the game and his 18th for the season on a 10-yard run. Coffee County upped their advantage to 34-3. Manny Gonzales was 4 of 5 on extra points.

The Pioneer starters were able to score two late touchdowns against mostly Raiders subs to make the final score, 34-17.

To go along with his 3 TD’s Heaton rushed for 105 yards on 19 carries. Pippenger had 81 yards rushing and 2 scores. He also tossed the ball for 87 yards. The leading receiver was Senior Jahlin Osbourne, catching 5 balls for 52 yards.

Coffee County defensive lineman Blayne Myers and the entire Raider defense played outstanding football forcing the mercy-rule to be enforced at one point in the second half. Myers was named the Rooster 101.5 Player of the Game.

Coffee County is now 5-2 overall and 3-0 in region play. The Raiders are off this week before traveling to Cookeville on the 14th, a win there and Coffee County will win their first region championship since 2010, when they upset the Cavilers in the season finale. The Raiders will travel to Rutherford County for a matchup with Rockvale on the 21st and the final regular season game is at home against Rhea County on the 28th, that’s also Senior Night.

Top Photo: Konor Heaton turns the corner on his way for one of his 3 TD’s. Jaiden Foster runs alongside and QB Cole Pippenger looks on in the background. Photo by Barry West